Press Release on a supermarket threat to a realignment route to enable a new Bedford-Olney-Northampton railway link at Olney in North Buckinghamshire, England.
ERTA is concerned about it's impact blighting the realignment route for a railway and being a drain on existing smaller shops in the area. 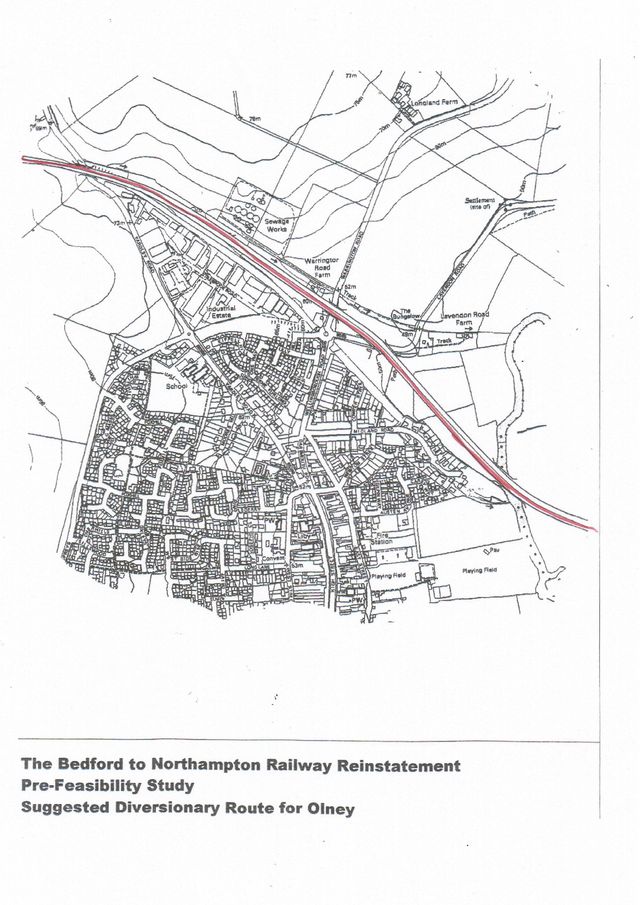 Map showing the Handley Rail alignment in red at Olney

30-07-2015
Press Release
ERTA Calls Upon The Public to Send a Supermarket Anywhere but on our Preferred Railway Trackbed Alignment!
ERTA calls upon Milton Keynes Council and the public to reject the proposed planning application:
Re: Application no: 14/02212/FUL Proposal: Food store (use class A1) and petrol filling station, recycling facilities and associated parking, servicing, drainage, landscaping, access and highway works
At: Land At Corner of Lavendon Road And Warrington Road Olney
ERTA objects to it because:
1. The site assumes the Handley alignment for realigning a new and reopened Bedford-Olney-Northampton rail link and this would increase cost, put back the prospects for recovery of a reasonable realignment for the railway in future and put it further away from the Olney High Street and attendant cycle, pedestrian and wider access between a new railway station and the Olney town centre.
2. The supermarket may drain existing local shops in Olney and could be located for want of a petrol station anywhere, indeed the Chichley Roundabout (A422/A509), complimenting the one further north of Olney (A428/A509) and that to redesign to make the railway go further out would make it harder to cross the River Great Ouse and re-link the other side with the former trackbed.
3. The railway and station would act as a rural interchange with No. 41 buses linking A428 villages to it and it, the wider arena of footfall and spend to them integrated public transport, likewise the No. 21 bus linking the station with Milton Keynes Central Station and Olney via Sherrington and Emberton. I/we do not want this window of potential to be jeopardised for want of petrol.
4. The railway should be supported by all in the social and economic interest of the town of Olney and a 5 mile catchment of population for commuting in and out, visitors and general economic life-flows. No development should be allowed to block the Handley Alignment and I/we call for further studies to ensure the corridor is not further eroded, compromised, made harder or more costly.
Further information and a fill-in objection letter can be obtained via email