Officially (on paper at least) UKIP still maintain they refuse to allow members of fascist groups into their party, but a mere cursory glance at UKIPers on Facebook and Twitter reveals hundreds of party publicists who trumpet not just UKIP but a whole host of far right organisations across the board from the EDL to the FN. So much so, that the common retort /excuse of UKIP's senior members is that EDLers, Britain Firsters and BNPers are "pretending to be UKIP to discredit the party", even though many of the aforementioned neo-Nazi UKIPers are regularly liked and retweeted by top ranking UKIP officials, giving them the social media seal of approval. 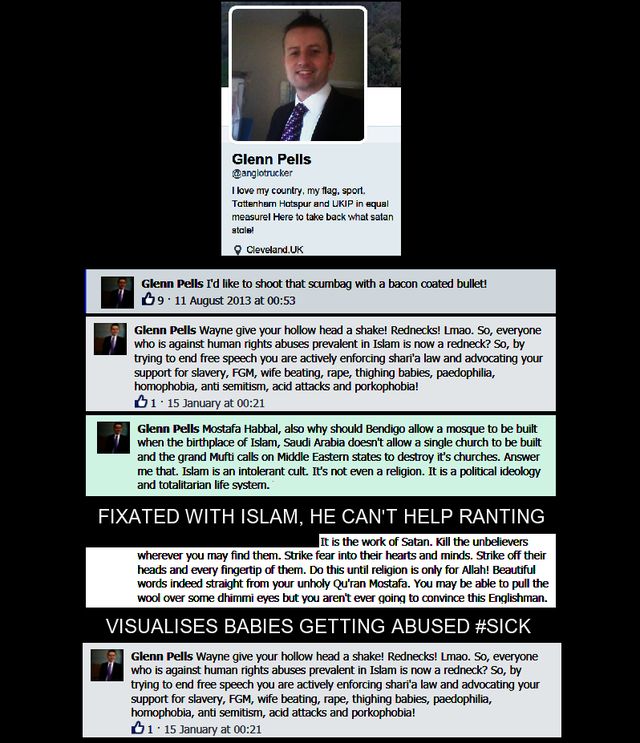 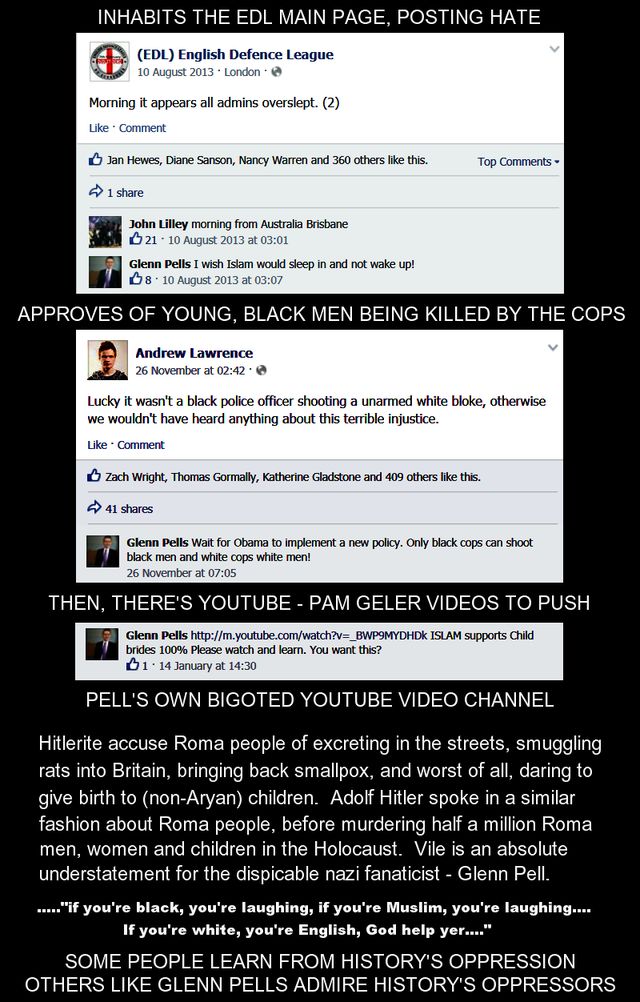 NEO-NAZIS TOLERATED BY THE UKIP LEADERSHIP

Glenn Pells, lorry driver from Loftus, Cleveland, an official, card-carrying UKIP party member was exposed earlier this year by Hope Not Hate for being an open Britain First supporter. Before 2012, the party had expelled members who were openly neo-Nazi, however, since the death of Lee Rigby, and the collapse of the electoral hopes of the BNP, and the drift away of their supporters, UKIP have softened their line towards the British Far Right to court their former voters, and this sea change is noticeable in the recent recruits welcomed into the party with EDL, BNP, and Britain First pedigree. Mr Pells has via Facebook and Twitter endorsed both organisations, and has "liked" EDL pages since 2009, which comes as absolutely no surprise to the casual observer.

Now it has become de-rigour to be racist, homophobic and chauvinist towards the camera by leading UKIP party officials, at grass roots level the floodgates have been opened for everybody and everybody, from casual pub racists to hardcore white supremacists, to join-up and become fully-fledged, paid-up members of UKIP.

Despite his open Twitter and facebook admiration of Pells towards BF, the EDL and other fash organisations, and the high profile expose on the HnH blog, UKIP have refused to cancel his membership. Indeed Pells has dressed himself in a fancy suit and put himself forward as an election candidate for 2015. Given some of the sickening, vile and downright national socialist remarks he has posted on social media, anybody who opposes racial and religious hatred should realise the danger himself and other fascist UKIP recruits pose to society. Throughout Central Europe, far right parties have spawned respected politicians, including France, Greece, Italy, Scandinavia, Belgium and Holland. Thanks to UKIP dismissing their membership entrance policy, the same thing is set to happen in the UK.

The combined screenshots above show a selection of the horrific neo-Nazi material posted online by this BNP-style suited and booted thug. (Many more can be found via Google by pumping in his name followed by random racist keywords).

Glen Pells seriously believes Islam is the "work of Satan" in his online blasts of fanaticism which sets the tone in a lot of his comments. He believes in hate preacher Pat Condell's "clash of civilisations", and his hopeful civil war between Muslims and non-Muslims, and many of his facebook posts talk about war and "eradicating Islam". Pells is seriously deluded, bordering on quasi-religious fervour.

Pells is the first to condemn the religion of Islam for homophobia, and yet he retweets homophobic news articles from Pat Dollard (Breitbart correspondent) including articles which sneer at the civil rights of gay men, proving his faux concern about gay rights is an what is known in the trade as "a sham of a convenience". (article retweeted

His appalling YouTube videos leave a sulphuric taste in the mouth when watched by people like myself of conscience. All the ingredients of a national socialist foamfest are present in his stack of video postings, the expected toxic dose of Islamophobia complemented by all-out Hitlerite anti-Roma hatred(shame on him - Adolf murdered half a million Roma men, women and children in concentration camps), and calls for all leftwing people including trade unionists to be "removed from society", once more a chilling reflection on his deadly fascist intentions.

Inspired by Pam Geller and Robert Spencer, for whom he pays tribute with loatheful YouTube comments, his thuggish extremist selfie-rants leave the notorious raving racist raver pirate radio broadcaster DJ Bossman Davey-Jay firmly in the shade. Aggressively striking up fear against trade unions, educated people, leftwingers, and non-white minorities left, right and centre, the rising star of UKIP goes full Niemoller, delivering the watcher a warning that if society is not careful, and fails to clamp down upon today's far right bigots, the future will be a worry if not the full-on race war that Mr Pells believes will happen in the year 2027.

Until blood is spilt on the streets in an all out (and thankfully fictional) religiously charged race war, young Mr Pells is defecates his pants with the fear of women playing a greater role in managing their own lives in male-dominated Western Society. He waxes unlyrically about a supposed "feminist plot" going down in the United Kingdom. Lefties are everywhere, he believes, hiding under beds, behind closets, and lurking ominously in the subversively lactating fountains of breastmilk. This feminist plot must be banished safely back to the 1950s if England is to break free from the curse of modernity and sexual equality.

All women should cover up in public, and do what they are told to do by men, unless they are Muslims choosing to wear a headscarf, when they should be arrested and charged with treason. David Cameron should, by Mr Pells' Machiavellian reckoning should be charged with treason not for removing benefits from disabled people, single mothers, or the bedroom tax, but because he failed to round up Muslims and destroy Islam. A "tap-room Pat Condell", Pells does not pussyfoot around when it comes to racial and religious extermination.

Pells also rants in favour of zero hours contracts on video, a friend of big business pretending to reach out to working class communities, whereas the only type of working class person he courts, is the brainwashed, bigoted Sun reader besotted over Katie Hopkins.

Here he rants with extreme anti-Roma hatred in his most vile rant, accusing Romanian Roma of excreting in the streets, smuggling rats into Britain, bringing back smallpox, and daring to give birth to children.

In a most outlandish rant, having called for trade unions to be banned, and all leftwing politics to be made illegal for the sake of the Fatherland, he comes out with a verbal smack to minorities suffering discrimination: -

A selection of Pells's screenshots are featured above on the picture accompanying this article. Many are on facebook, but he has an internet footprint that spans a large range of rightwing websites from the neo-conservative to the neo-Nazi.

He is administrator of a UKIP Facebook group exposed by EDL News, which aims to forge links between UKIPers, BNPers, Britain Firsters and EDLers. This very same group a few months back engaged in a sickening tirade of hate against Asian UKIP member Ummer Farooq.

So it seems the leadership managing UKIP have all but given up on their previous failed efforts to sanitise the party.


Glenn Pells has since joining UKIP, applied to become an election candidate. Heaven forbid any local authority which welcomes this hardcore racist bigot in its council chambers and committees. A throwback to the bad old days of BNP councillors getting elected to local authorities, his extreme bigotry is a stark reminder to anybody who does not believe that UKIP are racist, to wake up and smell the (white) coffee......


UKIP propagandist trolls who contaminate all newspaper comment sections from the Guardian to the Daily Mail, mutter incessantly about UKIP being "a breath of fresh air".


Or rather, with disciples of hate on-board Farage's joyride, stale air, a haunting blast of populist poison......


Consign nationalism to the dustbin of history where it rightfully belongs.