The Action AWE and Trident Ploughshares Burghfield Summer International Disarmament Camp continues until 7 September. Today, in a joint action with European anti-militarists, the site has been blockaded since early morning. 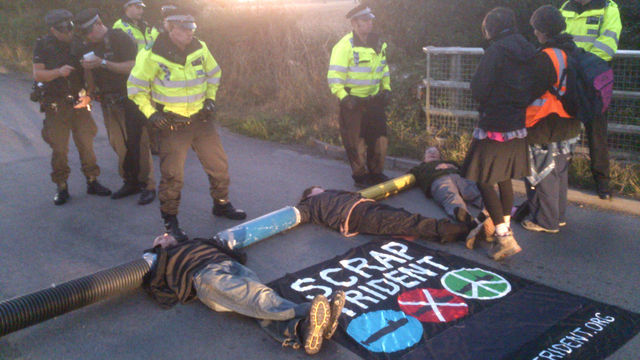 The Government has begun preparations for the replacement of the Trident nuclear weapons system. Without a debate in Parliament, and in the context of savage spending cuts on public services, the Government has committed to spending up to £100 billion on an illegal weapon of mass destruction that even senior military officers have described as 'useless'.

The nuclear warheads are designed, assembled and maintained at two sites not far outside Reading - AWE Aldermaston and AWE Burghfield. It is here that people opposed to the continued existence of Trident will gather for two weeks of nonviolent disarmament actions.

9am - 6 arrestees at south blockade from #finland.

8am - Police preventing supporters getting close to 2nd Blockade.

7am - 2nd Blockade now at #burghfield.

7am - Blockade now on at #burghfield with 4 anti-militarists from spain, chile, argentina.

Police telling Belgium activists how much disruption they have caused. That's right, we disrupt #nukes!

September 2, 2013, 5:15 a.m. – Activists from all over Europe are nonviolently blockading the gates of the Atomic Weapons Establishment (AWE) in Burghfield, Berkshire to demand an end to the Trident nuclear weapons renewal programme and urge the UK to comply with the Non-Proliferation Treaty (NPT) and join multilateral negotiations to ban all nuclear weapons.

The blockade and actions were part of a two week peace camp organised by Trident Ploughshares and Action AWE [1], involving peace activists from all over Britain, and from France, Belgium, Spain, Netherlands, Finland, and Germany.

Photos of the blockades here