Peace campaigners disrupted a nuclear weapons production facility at Burghfield, near Reading this morning, as they blockaded a gate for 5 hours on Tuesday 7th May 2013. The action is part of an ongoing campaign to Scrap Trident and end investment in weapons of mass destruction. 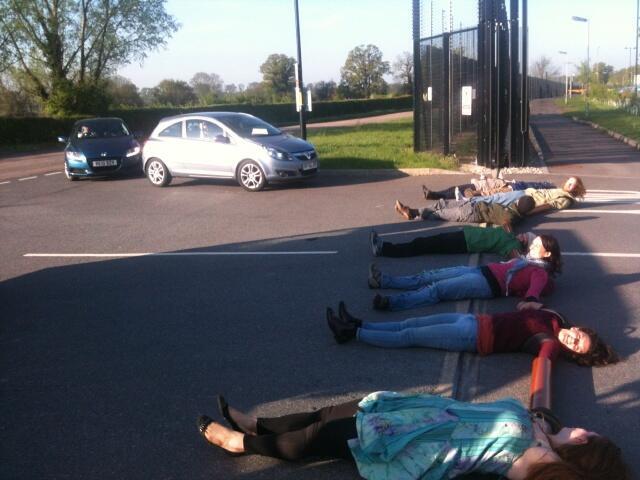 At 7.30am this morning a group of campaigners acting as part of ActionAWE [1] blocked the gate of the AWE Burghfield nuclear bomb factory near Reading, causing disruption to the production of weapons of mass destruction with the power to kill millions. Bound together with superglue eight activists knelt in the road, sang, and remembered those who have lost their lives to nuclear arms. The blockade stayed in place for 5 hours causing serious disruption to the nuclear weapons facility. No arrests were made.

Self employed businesswoman Nina Carter-Brown, 29, from Bradford, said: "Peace cannot be brought about through fear and greed. It must come from acts of love and justice. Trident's dependence on the threat of violence is obscene, and I cannot stand by and watch our government spend £100 billion of taxpayers' money to continue this evil."

Annelie Leinhos, 25, a project worker from Bradford, said: "Nuclear weapons are unethical, immoral and a horrendous waste of public funds in the face of cuts to health and care services."

Chloe Skinner, 25, a Ph.D student from Sheffield, said: "the planned renewal of Trident indicates that lessons haven't been learnt from past mistakes that have caused terror, destruction and the death of countless civilians. In the face of cuts to essential welfare systems, now is the time to take action against the government's dedication to this most horrific form of warfare."

The UK has an armed nuclear submarine at sea and ready to fire every day of the year, able to wipe out cities almost anywhere on earth within 15 minutes[2]. The UK has a stockpile of around 225 nuclear warheads[3], each with around eight times the explosive power of the bomb dropped on Hiroshima in 1945 [4] that killed an estimated 140,000 to 200,000 people. Running the Trident nuclear weapons system currently costs £2 billion a year[5], at a time when other government services are facing cutbacks across the board. The government will vote in 2016 to decide whether to invest in the UK's Trident nuclear weapon system for another 30 years.

Operated by a consortium of Jacobs Engineering Group, Lockheed Martin and Serco, AWE Burghfield plays an integral part in the final assembly and maintenance of nuclear warheads for use in the Trident system[6]. In 2011 Peter Luff, the then Minister for Defence Equipment, announced £2 billion of spending for redevelopment of the Burghfield and Aldermaston weapons factories[7]. The total spending on Weapons of Mass Destruction in the UK will soar to over £100 Billion should the government take the decision to renew Trident in 2016 [8].

Action AWE (Atomic Weapons Eradication) is a grassroots campaign of nonviolent action dedicated to halting nuclear weapons production at the Atomic Weapons Establishment factories at Aldermaston and Burghfield. The purpose is for groups and individuals to undertake autonomous actions and events from February 2013 onwards to raise awareness of the catastrophic humanitarian consequences of nuclear weapons and exert political pressure for Britain to end the production, replacement and deployment of Trident and join other countries in negotiating a global treaty to ban nuclear weapons.

http://www.cnduk.org/information/briefings UK warheads are thought to have a yield of 80-100kt.