The Vale of Evesham Vegan Fair on Saturday 23rd March is expected to attract hundreds of local residents and people from across the region. With lots of delicious FREE food, 20 stalls, talks and cookery demos, this is the biggest vegan event ever staged in Worcestershire!!
At Evesham Town Hall, 10.30am - 4pm. FREE admission, all welcome! 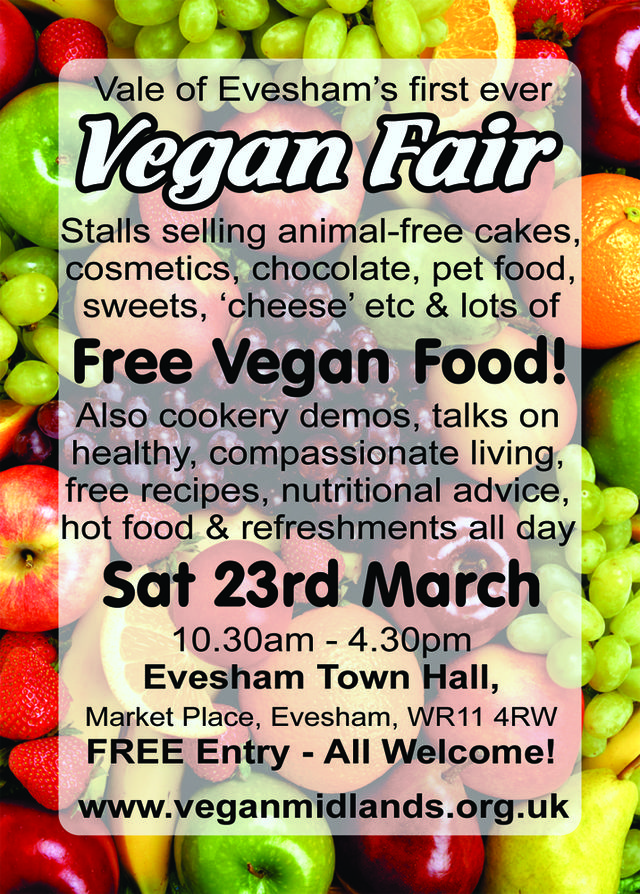 Leaflet for the Vale of Evesham Vegan Fair 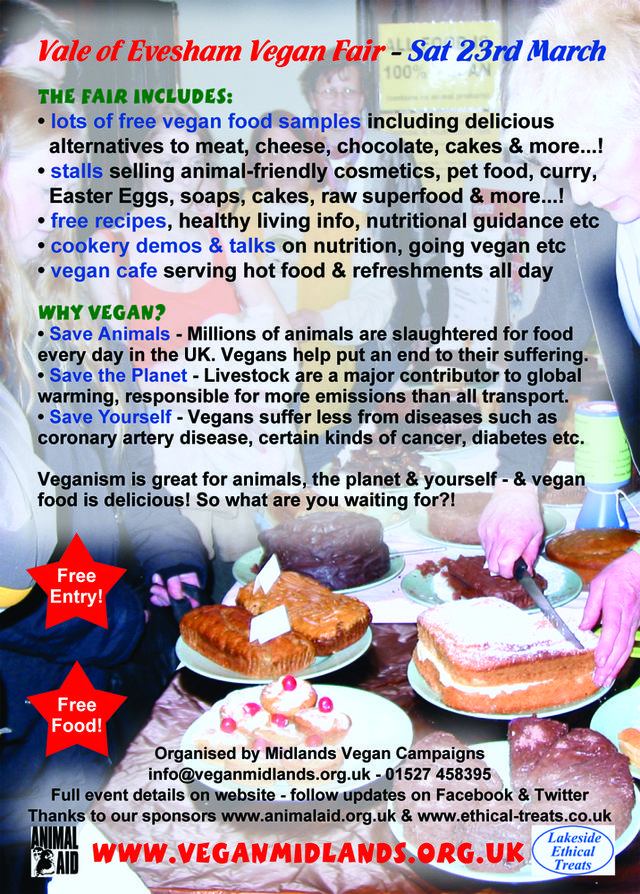 Rear of the leaflet 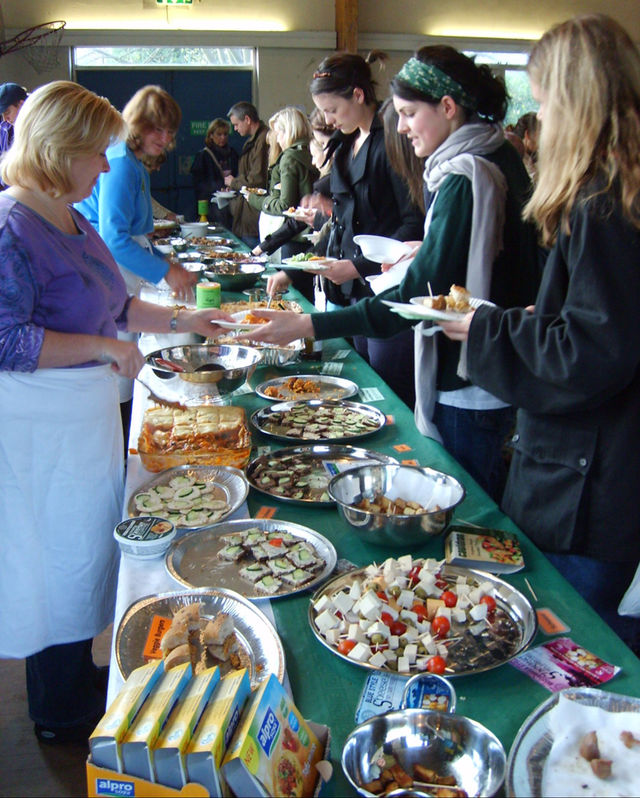 Free food sampling at a vegan fair in Birmingham 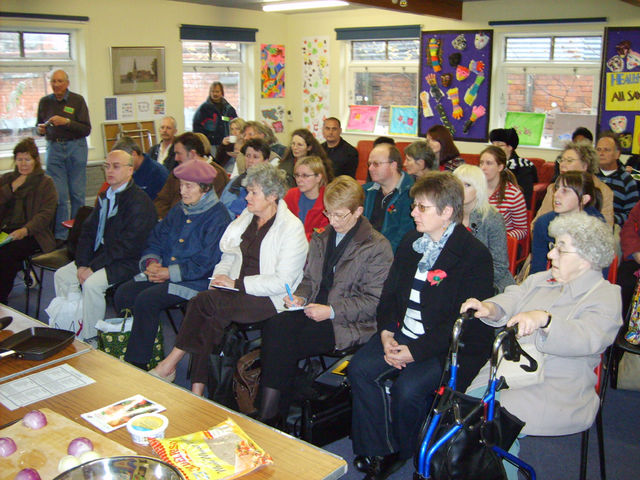 The audience at a vegan cookery demo in Birmingham 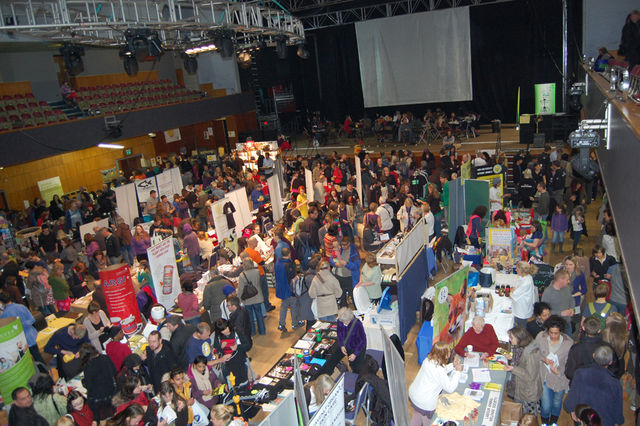 Crowded aisles at the West Midlands Vegan Festival 2012, in Wolverhampton 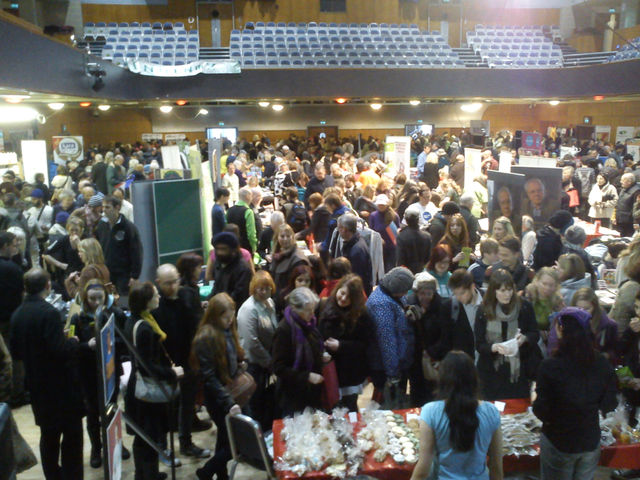 The Vale of Evesham's first ever Vegan Fair later this month looks set to be besieged by food lovers from across the region! On Saturday 23rd March, Evesham Town Hall will be transformed in to an oasis of healthy, compassionate living, showcasing the very best in veganism.

There'll be lots of free recipes, healthy living guides and nutritional advice available. A vegan cafe will sell scrumptious hot food & refreshments throughout the day. There will also be talks on nutrition and going vegan, plus simple cookery demonstrations.

The event has been organised by Midlands Vegan Campaigns(MVC), a small group of volunteers who are committed to promoting healthy, plant based diets for the benefit of animals, people & the planet. MVC hope to attract hundreds of local residents and people from across the region.

Kevin White, MVC founder & main event coordinator said, "The fair will offer all you need for healthy, compassionate living. Fair-goers don't have to be veggie or vegan to attend, all are welcome! We encourage everyone to come and discover why people are increasingly adopting a vegan lifestyle".

"The free fantastic feast will demonstrate how delicious, appetising and varied vegan cuisine has become. We promise to tempt the taste buds of even the most committed carnivores!!".

Redditch based MVC have organised a string of similar events since their formation in 2007. In October last year, the huge Civic Hall in Wolverhampton was packed out for the fifth West Midlands Vegan Festival. Of the 2,000 visitors, more than half were non-vegans!

Kevin White continued, "Curiosity in vegan lifestyles has snowballed in recent years, as people seek a healthier, more ethical way of life. The horse meat scandal has increased interest in plant based diets even further, with a surge in sales of meat and dairy alternatives and many more people seeking our advice in recent weeks."

"People who choose not to eat animal products do so for a whole range of reasons, not the least being that a varied vegan diet lowers the risk of heart disease, diabetes and certain cancers and increases life expectancy. It also eliminates suffering and saves the lives of thousands of animals as well as being a lot kinder to the planet. Vegan food is not only nutritious but it's delicious too, as everyone visiting the fair will discover."

"It will be the first ever vegan fair in Evesham and the biggest vegan event ever staged in Worcestershire! We hope to attract hundreds of local residents and people from across the region!"

The fair is free admission and will be open from 10.30am - 4pm. Anyone seeking more information about the event should see our website www.veganmidlands.org.uk or call us on 01527 458395.