For the first time since the invasion of Afghanistan, this month, a group of British peace activists will be visiting Kabul, with the intention of building links between the peaceful, day-to-day citizens of their two countries. 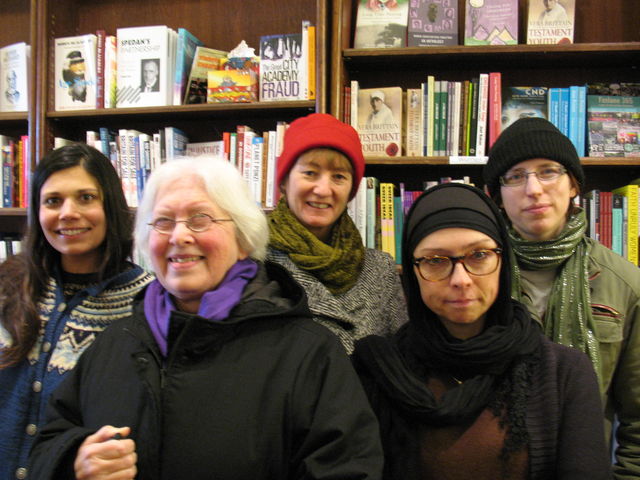 For the first time since the invasion of Afghanistan, this month, a group of British peace activists will be visiting Kabul, with the intention of building links between the peaceful, day-to-day citizens of their two countries.

Organised by Voices for Creative Non-Violence UK (VCNVUK), the group hope to spend their two weeks in the country visiting several grass-roots, community led organisations, including peace activists, income-generating co-operatives and human rights volunteers as well as refugee camps. They also hope to spend time “hanging out with normal people”. Through this the group of five women, aged from twenty-eight to sixty-six, hope to highlight just how extensive self-organsiation and community action are in Afghanistan and show a different image of local people taking control of their own lives.

One of the group, Ariadne Bechthold, 42, originally from Rotterdam but now living in Brighton, explains how they hope to stand alongside and learn from people engaged in this process: “We hope to make a positive contribution to development and a sustainable civilian based peace in Afghanistan. We are in favour of self-determination of the Afghan people”. She hopes to use her experience in community media as part of this.

Youngest of the delgates, Bethan Tichborne, 28, a teaching assistant from tonbridge now living in Oxford, echoes her sentiments. “All of the news that we read from Afghanistan comes from politicians, or journalists embedded in the military, it doesn't tell us anything about what life is like for most people in the country. I want to connect on a human level with people living in Afghanistan.” She reflects on how her own opinions of the war in Afghanistan have changed, from initial acceptance after the invasion, to a strong stand for peace. “I don't think many of us understand what war is. Films and games convince teenagers that war is rewarding and entertaining, history lessons and newspapers tell us that it's justified and good. I fell for all of that. That's why I want to help the voices of the Afghan community reach as many people as possible in this country.”

This strong commitment to peace is shared by others of her team, including Susan Clarkson, at 66 the eldest delegate and a long-standing peace campaigner. Like many of the team, her beliefs have led her in the past to risk arrest and imprisonment for consistently peaceful protest on anti-war issues. Living in Oxford as part of a community that offers support and accommodation to asylum seekers, many of them from Afghanistan, she has heard first-hand what the ongoing conflict has meant to people on the ground in the country. “When the opportunity arose to be part of VCNVUK and to visit APV I felt this was the next step after years of livingalongside Afghan asylum seekers and joining in anti war activities on their behalf.” Susan, who is visually impaired, also hopes that the team's visit may have a lasting impact for peace on the people they meet “My country, which I love very much, has been waging war in Afghanistanfor 11 years.  I am going to Afghanistan as an ordinary citizen to meet ordinary Afghans to find out how together we can make our visionof a peaceful world a reality.”

Similarly, the team's co-ordinator, Maya Evans, is equally clear about the peaceful yet political motivation of the trip: “I feel that as a citizen of this country it is my responsibility to ensure that our elected leaders are not involving us in international human rights violations, in pain and suffering of innocent civilians and moreover , not involving us in a war that most people don’t want”. At 32, the administrator from Hackney but living in St Leonards on Sea, has been involved in numerous peaceful actions challenging the legality of the war, including two High Court judicial reviews regarding British foreign policy in Afghanistan. She also visited Afghanistan herself in 2011, an experience which she has since written and spoken about extensively. Her motivation for these attempts to raise publicity are clear: “The Afghan war, which is now in its 12th year, has more or less dropped off the radar of the media. It is currently costing British taxpayers £5 billion a year, and though the Government claims that British troops are fighting there to keep us safe, 80% of the public simply don't believe them.”

Despite the strong political and ideological motivation of the team members, they are clear that they are not going with any agenda to impose their opinions on the people they meet. They intend to spend time meeting with ordinary people and listening to their stories and voices. In particular, they are looking forward to seeing the level of unity that there is between the different ethnic and religious groups on an everyday, community level, rather than the divides so often highlighted. They hope to hear, learn from and report back on genuine Afghan opinions of western involvement in their country and its effects. Mary Dobbing, 56, of Bristol, makes it states that "We are going at their invitation, not off our own initiative or for our own ends" TShe is keen to make it clear that "we are traveling as friends and equals of the Afghanistanis we will be visiting, not to fix Afghanistan but to fix UK perspectives on Afghanistan"

Amongst the groups whose invitation they have so readily responded to are the Afghan Peace Volunteers (APV). These are a group of primarily young people who seek at a grass-roots level to promote peace and communication between the various communities within Afghanistan and those communities beyond their borders in the wider world. Amongst their projects are the monthly 'Global Day of Listening' Skype conversations, where anyone around the globe can talk directly to the Volunteers and their community and get a genuine perspective on everyday life and experience in the heart of Afghanistan . The delegation will be taking part in this themselves on 21st December, and invite people to join in via the website, www.globaldaysoflistening.org

***Also, APV have co-ordinated the 'Two Million Friends' petition, which calls for an all party ceasefire to be negotiated in Afghanistan. The first part of this will be presented to the UN by Kathy Kelly of VCNCUK on 10th December. *** They are still seeking more people to sign up and 'befriend' Afghanistan, however, and this is possible via their website, www.2millionfriends.org

Whilst the group are confident of a positive outcome for the trip, and keen to build strong, supportive links with the community, raising awareness of how much good is being done on the ground and brightening the image of what is often seen as a country with much darkness, they are well aware of the risks that they could be undertaking. Much preparation has been done both in Afghanistan and by the delegates themselves to be ready for and to think through all eventualities. They clearly understand that their may be a high personal cost to them as individuals, and are keen to ensure that any such cost should not be carried by anyone else. Part of their preparation has including drafting clear statements that in a worse case scenario, they do not want – and in fact would be opposed to - any military intervention on their behalf, as they feel that this would undermine the whole purpose and nature of their journey.

However, they remain assured that much good will come from their visit. Maya exemplifies this as she says, "I’m looking forward to working in solidarity with Afghan youth who have the dream of non-violent peace in their land. They are a massive source of inspiration, they’ve known nothing but war yet they hold a candle for peace and hope.” Her team mate, Ariadne, shares her enthusiasm and is full of hopeful expectations for their travels: “I am intrigued by the cultures, impressed by the history, amazed by its beauty and moved by the people. When Afghanistan catches your heart, it's there to stay.”

People wishing to support the delegates financially can do so by sending cheques made out “VCNVUK” to VCNV UK, 31 Carisbrooke Road, St Leonards on Sea, East Sussex, TN38 OJN.

Delegates are still in UK and so available for comment on request.

The following is a list of websites that are relevant to the trip and may be useful sources for background info:

Voices for Creative Non-Violence: The sending organisation, of which this delegation is a part: www.vcnv.org
Afghan Peace Volunteers: The hosting / inviting organisation: www.ourjourneytosmile.com
2 million friends: website related to APV, trying to find 2 million people to “befriend” Afghanistan: www.2millionfriends.org
APV Global Days of Listening: website organising the Global days of listening skype discussions hosted by APV... would be good to take part in the next one 21st December: www.globaldaysoflistening.org
Peace News Kabul Winter appeal:

http://peacenews.info/node/7031/support-peace-news-kabul-winter-appeal which the delegates will be involved with and people may want to give to.

The following provide information about the delegates and their specific projects and interests:
Afghan Voice: news and media relating to Afghnistan, of which Ariadne Bechthold is a part:

http://www.guardian.co.uk/uk/2010/jun/25/activist-partial-victory-transfer-taliban) in relation to British complicity in the torture of Afghan detainees.