Community enterprises offered the chance to learn from Westmill Solar Co-op Ltd, which raised £4m through community shares in a record-breaking six weeks. 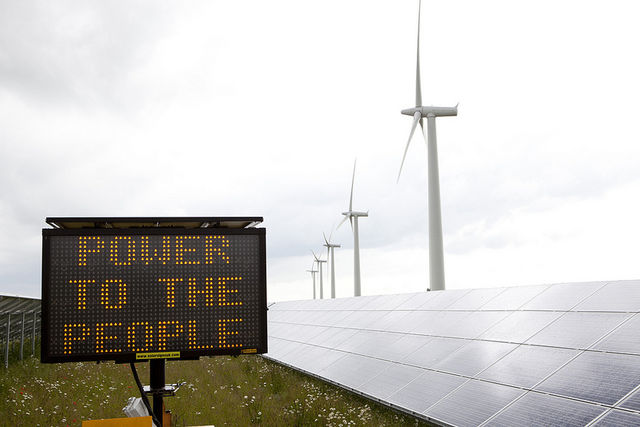 The chance to learn from a director of the company behind the UK's most successful community share issue is being offered to businesses and community enterprises.

The share issue gave members of the public the chance to invest between £250 and £20,000 in the 21,000 panel solar farm, and 60 percent of the share applications came from people living within 25 miles of the site.

Share holders became members of the co-operative, giving them an equal say in the way the company is run, and making them eligible to join the board of directors.

Now Mark Luntley, a director at Westmill Solar Co-op Ltd and chairman of the community-owned wind farm on the same site, has been confirmed as guest speaker at the Co-operative Futures seminar at City Works in Gloucester on Wednesday, September 5.

Could Your Community Share? is aimed at companies or communities that could benefit from raising finance through the issue of community shares.

Seminar organiser Jo White, executive director of business development agency Co-operative Futures said: “Community Shares have been used to raise finance for everything from community shops and community energy schemes to supporter-owned sports clubs like FC United of Manchester, which aims to raise £4.8 million to buy its own ground.

“Nationally, there are over 100 organisations currently using this method of raising investment.”

The seminar will also be addressed by Alison Crane of Gloucestershire Community Energy Co-op, which raised £105,000 in shares to install solar panels on the roof of the City Works building in Gloucester – a former shirt factory which is now home to social enterprises and neighbourhood projects.

Joe Hasell from Cultivate Oxford, a not-for-profit social enterprise bringing fresh, local, organically-grown food direct from farmers to the city, will talk about the launch of their £55,000 community share issue to buy farm equipment and seeds and a new VegVan, and to support the running costs of the enterprise for the first year.

And the panel of experts will be completed by a representative from Co-operatives UK, the national trade body that campaigns for co-operation and works to promote, develop and unite co-operative enterprises.

The seminar, which is free to attend, will be held at City Works, Alfred Street, Gloucester, GL1 4DF from 11am to 12.45pm and will be followed by Co-operatives Futures' AGM, and a networking lunch from 1pm until 2pm.

To register for a place, or for more information on starting a business or enterprise as a co-operative, log on to www.futures.coop