In faraway Sri Lanka, which is never faraway for the political manipulations through the Oxford University using the Oxford Union, amidst contradictory accounts, an email from James Kingston, then president of the Oxford Union dating back to sometime after december 2010 is revealed.
Despite credible allegations that the PR outfit Bell Pottinger organised the whole event, James Kingston comes up with a different version and stands 'by my invitation to the President, and had looked forward to his speech with great excitement'. James Kingston also seems to assert that no one else holds power in the Oxford Union while claiming ownership for the decision to pull the plug on the 'largest demonstration seen in the history of Oxford' 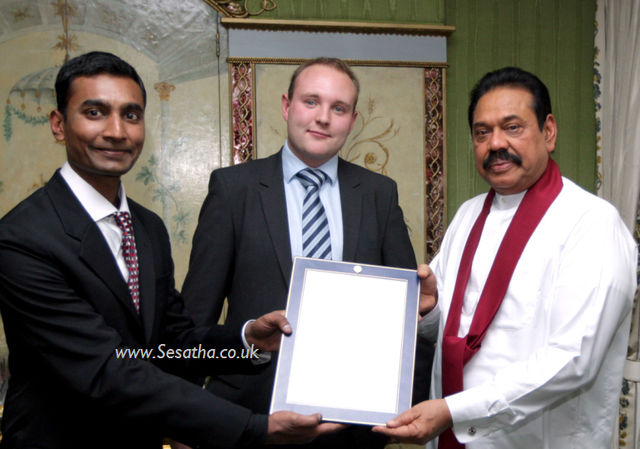 On 9th June 2012, in the Daily Mirror newspaper in Sri Lanka, a Tamil journalist in 'the most dangerous place to be a journalist' (according to to CPJ) published an email claiming to be from James Kingston, past president of Oxford Union.

Many thanks for your email; I entirely understand why you might feel moved to ask me these further questions. The decision made to cancel the President’s talk was an incredibly serious one, and one I did not take lightly.

I made it after consulting other Union office bearers, the Police, and representatives of the University as a whole. The police advised me that, though they had a plan in place, they could not guarantee the behaviour of the crowd, not that it would not grow further. I was advised there was a serious public order risk, and a serious risk of major disruption to the activities of the local community. At 5000 protesters, it would have been the largest demonstration seen in the history of Oxford, and the risks would have increased accordingly.

I was further advised by the Union’s own security team that the Union would have been put at great risk of break in by the protesters: in 2007, at a smaller protest, the crowd had rushed over the walls and into the building. I could not put President of Sri Lanka under this risk.

I had no meetings with Tamil activists. The Union holds an apolitical stance; we do not make political gestures. I stand by my invitation to the President, and had looked forward to his speech with great excitement; however, this decision was taken purely upon security grounds and no other.

This decision was made after full consultation with other Union office holders. The University holds no power in the Union.
Many thanks,

Tami extremism in UK will bite back one day

It is possible that the President went to the event to show his point; that some of the active diaspora groups are intransigent or even ‘terrorists.’ Now the government is utilizing the debacle for its advantage as reported in The Island (14 June) claiming that it posed a threat to President’s life. It is true that he or his armed forces are accused of war crimes and more and more evidence is unleashed by different sources completely credible or not. But there should be a due process and that due process cannot be taken over by the extremist activists in London.

Unlike the Oxford event, the Commonwealth Heads and Governments are involved in this instance. At least some of them might not take the rebuff that one of their counterparts had to undergo without sympathy. After all he was invited by the Commonwealth Business Council and business of the Commonwealth cannot be conducted under the siege of the extremist agitation. The next Commonwealth Heads of Government Meeting (CHGOM) is scheduled to be held in Sri Lanka in 2013 and the President is going to be the host of this event.

Factual report of the recent protest

During the final days of the war, he was away in China with his arms dealer son-in-law collecting commission money and conniving with his son-law to order for another shipment of arms and ammunition.

On 20 August 2009, the Defence Secretariat was informed of the arrival of the Mechanized Vessel Lily from China with 206, 20ft containers and 3 containers of 40 ft with arms and ammunition from China. The arrival came as a surprise. After Mahinda Rajapaksa became the President, the practice adopted is to order and regularize imports of military hardware through Lanka Logistics.

Earlier the import orders used to be placed by forces commanders in a haphazard manner. Asian Tribune learns that Defence Secretary streamlined the import procedure and set up Lanka Logistics as the agency to handle all imports of military equipment.

Lanka Logistics is presently headed by Nimal Perera. He is a former Director of Noritake Lanka Porcelain. Jayanth Wickremasinghe is the Chief Executive of Lanka Logistics.

Normally arms and ammunitions are imported after asset drill and opening up of the Letters of Credit for the ordnance factory which would send the military hardware.

Instead of going through these procedures, MV Lilly arrived at Colombo Port from China with Poly Technologists’s hardware - RPGs’ artillery ammunitions, small arms ammunitions, and spares for artilleries.

According to Lanka Logistics they have not opened up the necessary Letter of Credit for the ‘cargo’ that came. This was the hardware that was indented during Gen Fonseka’s holiday to China. His son-in-law, who was on the holiday trip, is the agent of Poly Technologists.

According to the Defence Ministry there is no need for the Poly Technologists’s hardware that came aboard MV Lilly. The ship was accordingly sent back to China.

No matter what through south-south cooperation we will do everything better.
USA and UK economies are about to collapse. Cuba, a friend for 50 years is giving help with transgenic crops without the ways Monsanto from USA bullies third world countries. Sri Lanka will be equal partner with cuba.
Sri Lanka will blaze the way forward as major economic power.


The room was packed. The panel, consisting of journalists, activists and relatives of the victims, were speaking to an audience made up mainly of Sri Lankans. I was there too, partly because I admire the work of the film maker Callum Macrae and partly because this kind of bunfight is worth watching, however painful.

The representative of the Government of Sri Lanka, Rajiva Wijesinha, in fine pudding-basin style haircut, was fighting the corner for the ruling party. In a long and rambling discourse, part stream of consciousness, part shaggy-dog story, he unravelled the contents of his mind. Well some of it, at least.
Sitting next to him was a Sri Lankan victim of the LTTE whose testament of horror from the reign of Tiger terror (he was abducted and tortured at the age of thirteen before his parents were killed) was being shamelessly mis-used by Our Man From Sri Lanka for its own ends.
There was also Jan Jananayagam, spokesperson for Tamils Against Genocide, Callum Macrae of course, Yolander Foster, Amnesty International's excellent Sri Lankan researcher and the Chair, Stephen Sackur from the BBC's programme Hardtalk.
Pudding Basin had brought a few books for which he wanted one pound. The reason for this nominal sum, he informed the audience, was because he knew British fellows respected anything they paid for. The title of one of them.
The Road to Reconciliation & its Enemies [Documented Evidence & Logical Arguments against Emotional Exaggeration & Soundbites.]
Huh?
What with his slender grasp of anything much, his denial of the authenticity of Callum Macrea's Sri Lanka's Killing Field and his generally vague logorrhea, Pudding Basin was giving the Chair a hard time of it. I thought he did rather well, considering. The Chair, I mean, not PB, whose deathless oratory lulled me into gentle slumber only to find myself woken up with a start when the gushing, 1940's pre-Empire prose, finally stopped. This man was a member of the Sri Lankan government?

The audience, those one removed from the sorrow and the pity of Sri Lanka's genocide, tittered. What else could they do in the face of such stupidity? At one point I marvelled at the way in which the other panelist, victim of the Tamil terrorist group, was being so shamelessly used for government propaganda. Why was it that this man's terrible loss could not be treated with objective understanding? And then, because there was nothing else I could do, because the discussion had reached its most formless stage, I opened my sketchbook and began to draw instead.

I noticed one or two murderous looks, coming from the Singhala side of the audience, present undoubtedly to defend their assets in their homeland.
I noticed too for the first time how some younger, middle class Singhala and Tamil were uniting now in their desire (at least) for a kind of peace. Don't talk about the war, seemed to be the slogan. Move on, use the word peace, rebuild. Fine words, great sentiments. I agree.

But what of those who cannot move on, who do not have closure for their grief, whose loved ones are dead, disappeared, without a grave or in one with masses?
A lone woman stood up; beautiful, elderly, small. I had heard her say earlier that she would not cry tonight as she had spent the whole day crying. In a voice that rose like the waters of a tsunami she talked about the underlying causes of the civil war, the discrimination, the loss of life that had gone on for years. Since British Crown Rule had ended in fact. Brava, I wanted to shout. For hadn't I myself, in 1958 aged only four, seen a Tamil man burnt to death?
Finally the woman lost it and began to shout. And had to be told to sit down. Grief, it was. Her voice was that of Grief held in check for years and years.
So what of this voice? Who will treat her grief as a sacred thing, give it dignity, rock it to sleep? Pudding Head closed his eyes and tilted his head back. The audience rumbled, agreeing and disagreeing, If grief and denial and greed and violence could coexist so seamlessly in an upstairs room in London imagine what it must be like, unchecked, in Sri Lanka itself.
It doesn't take rocket science to see that the country needs outside monitoring and that both victims and perpetrators need help in order to stop this terrible cycle.

The comedian Eddie Izzard once joked that the international community was happy to turn a blind eye on those countries engaged in killing their own people. It is only when they go next door, as Hitler did with Poland, do they intervene. If that is indeed still the case, Pudding Head and his henchmen will be just fine for the foreseeable future. Helped by those young middle class Sri Lankans who simply want to move on, whatever that means.

President Michael Sata, addressing the meeting of businessmen during the Commonwealth Economic Conference (CEC) at Mansion House, said Zambia was being short-changed.
“We are not getting enough from our mineral resources,” he told the packed conference as he sought what he called ‘good’ investors from London, Canada and Australia.
Profits go overseas
There is no question that this change is desperately needed. Zambia is a stable country and has been for decades. Its copper should be pulling the country’s people out of the grasps of poverty. But its performance on any measure is comparatively miserable.
The World Bank study expressed concerns that despite Zambia featuring in the ‘top quadrant’ of resource-dependent countries, it ‘still belongs to a group of economies with very low levels of capital accumulation.’