An update on some of the court cases involving those who refused to complete the 2011 Census on anti-war and anti-surveillance grounds amongst others. Many objections were directly related to arms manufacturer Lockheed Martin's contract to process census data. The CPS has started dropping cases. This is the latest information we have. Please get in touch if you have more up-to-date info on any of these cases (or others). 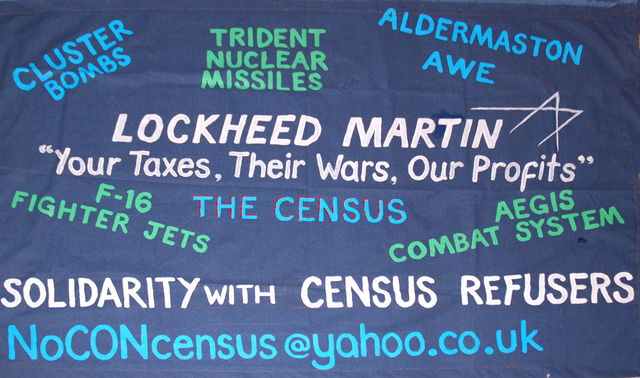 (Wrexham, then Bristol, who sent case back to Wrexham)
Case dropped by CPS one day before John was due to appear in Wrexham
Magistrates court on Friday 11 May.

(Wrexham, then Shrewsbury)
Case dropped by CPS but revived by Judith.
Court date: Thursday 17 May, 10am, Shrewsbury Magistrates Court.
Crown is likely to present no evidence against Judith.

*There is some query over the above two dates - awaiting update*

(Birmingham)
Roger is refusing to pay the fine imposed by the courts and is expecting Bailiffs.

(Areas in brackets indicate court locations. In most instances, people live far from these locations)

For previous reports on some of these cases, see the indymedia census refuser topic: