A Year of Screenings from OARC & OxIMC

I realised that we're coming up to a year since we started regular film screenings at OARC on a Sunday evening and I thought I'd pen a review of it so far... 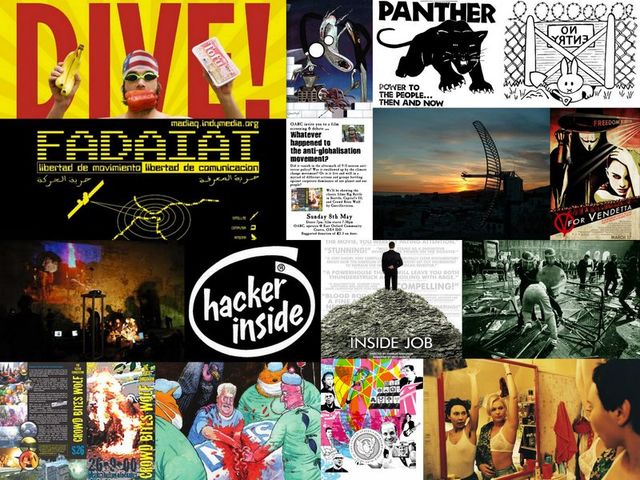 It kind of started back in April 2011 with the showing of the Battle of Trafalgar, which although not an official Sunday screening, kick started us into the regular monthly screenings. Hence this is what I'll call the beginning of our first year.

Our first official night was on May 2011 with an introspective on the late 90s and early 0s Antiglobalisation Movement. We screened the three excellent Guerillavision films Big Rattle in Seattle, Capitol's Ill and Crowd Bites Wolf, interspaced with a few shorts. We had a good turn out and realised the idea was a goer.

So on to June and the excellent RIP! A Remix Manifesto, a film about web activist and filmmaker Brett Gaylor and the issues of copyright in the information age.

We had to skip July due to the (Not The) Cowley Road Carnival (At All) party being held in the community centre, and so postponed our screening of the two hacker epics In Search of Hackers and Hippies From Hell until August. This was probably our lowest attendance of all the films, which could be something to do with it always being hard to get the jaded British activist scene along to films about hackers (even though they'd be pleasantly surprised and realise they're actually really in to them if they did go), or more likely because it was August and everyone was sunning themselves on the Costa Del Sol, obviously having travelled their on the back of a donkey, rather than having flown.

So back with a vengeance in September, when we threw aside our independent film ethics in favour of a commercial film in the guise of Inside Job. Apparently costing twenty thousand million dollars to make, the film, narrated my none other than Matt Damon follows the 2008 financial crisis in the US and the fall of Lehman Bros, Bear Sterns, AIG, Goldman Sachs, Freddie Mac and Fanny May and the rest of their ilk. The film showed us, all too clearly, how those in charge of those ill-fated financial organisations and US monetary policy were all too often afterwards given jobs in the US government to deal with the crisis: and what did they do? They gave taxpayers money to their rich, fat friends, and it was business as usual. Nice! And although it's quite a lightweight treatment of the topic, for a mainstream film produced by Sony Entertainment it's surprisingly critical of the system that keeps it in the money….

In October, we were joined by Emily Coats from the UK Tar Sands Network who presented H2Oil, a film about the Canadian Tar Sands and the huge environmental and social damage they are doing. Afterwards we had a good discussion about it, one of the most destructive of projects on the planet.

For November we showed the two-part film All Power to the People, about the Black Panther movement in 60s and 70s America. It was a very inspiring film and it was notable to me to discover that one of the parts of the movement that the US powers that be found most threatening were the soup kitchens, because they created social cohesion and unity in the community. The Panthers were infiltrated and systematically undermined and ultimately destroyed by the US authorities, and even today, a number of activist languish in US gaols on the flimsiest of fabricated evidence.

In December we screened a third independent film Dive! Living Off America's Waste. Inspired by the curiosity about the US’s careless habit of sending food straight to landfills, the film follows Jeremy Seifert and friends as they dumpster dive in the back alleys and gated garbage receptacles of Los Angels’ supermarkets. It was a fun film and afterwards we had a very interested discussion that culminated in most of us going off 'skipping' and a couple of us preferring to go for a refreshing bevy at a local ale house.

We thought we'd start the year with a light feel-good film and chose Tilsammens (Together), a comedy drama set in a Swedish commune in the 1970s for our January screening. One house; one revolutionary; two open straight marriages; three gay people (maybe four); three children; two carnivores and eight vegetarians are the characters we follow. It's a film that's much better than you think it might be. In my opinion, it appears on the surface to be amateurish, with shaky camera and odd angles, but it's actually about closeness and realism and by the end of the film you're shedding a tear of joy and singing along to various Abba numbers (of course).

So after all that gentle hippy stuff in January, we decided to up the ante for February and showed V for Vendetta, the 2006 film adaptation of Alan Moore and David Lloyd's 80s comic book series. There's a plethora of great actors in this film, including Natalie Portman, Hugo Weaving, Stephen Rea, John Hurt, Stephen Fry, Tim Pigott-Smith, and even a small appearance by Eddie Marsan. The two hour long film is an emotive, tear-jerking, furious, forlorn, hopeful and defiant look at a totalitarian distopian future UK and the renegade V who works to show the people the truth and overthrow the regime. As V puts it: People should not be afraid of their Governments, it is Governments that should be afraid of the People.

And so to March and a return to grass-roots independent films with Wake Up Call, a collection of three short films by film maker Anne-Marie Sweeney who joined us on the night to introduce them. The films show graphically why the government's plans will vandalise the NHS, fragmenting and privatising in a shocking attack on the core values of our health service and patient care to further the profits of global private health companies. Annie-Marie's personal approach gets right to the heart of the matter, with long term healthcare workers, patients and GPs all concuring on what an simply idiotic . Presented in association with Keep Our NHS Public and Health Emergency and, as always, Oxford Indymedia.

So, here we are, April 2012, and we have a April, May and June lined up with great films already:

1st April - Breaking The Fences: A No Borders film night

We'll be showing some short films on freedom of movement, migration controls, and resistance. A fundraiser to support action against deportation.

6th May - Taking on Tarmageddon

Following October 2011′s screening of H2Oil, we’re pleased to be holding a screening and debate of the brand-new Taking on Tarmageddon produced by local independent film outfit Campbell Road Productions in partnership with Artists Project Earth, People & Planet, Film Oxford and New Internationlist. We shall have guests from People & Planet and the UK Tar Sands Network who were involved in the making of the film as well as the film makers to talk about the film, the tar sands and their experiences.

Please note, this is a bigger event than normal and will be held downstairs at the community centre, where there is a bar. Also the recommended donation for this event is £5 (this event only), £3 for students and those with on income support or the dole, and of course, if you’re totally skint, whatever you can afford.

First screened 30 years ago in Cannes on 23rd May 1982, Pink Floyd The Wall is Alan Parker's film-adaptation of Roger Waters' largely autobiographical concept album about a rock and roll artist who, having lost his father to WWII, been smothered by his over-protective mother, abused by his teachers and addled his brain on a cocktail of booze and drugs, show after show, party after party, estranged from his wife and increasingly isolated from the people around him, eventually descends into madness that leads him to fascism. In the culmination of the film, we see his own self-imposed introspective trial that leads him to tear down the wall he's constructed around himself, a new day is possible as those who walk up and down outside the wall are revealed to him. The film features some excellent animation of cartoonist Gerald Scarfe, who was also closely involved with Parker and Waters in the design of the film. Oh, and yes, Sir Bob "all these anti-globalisation activists are idiots" Geldof is in it. It may not sound like a whole load of fun, and it is a tad harrowing at times, but if you haven't seen it, it's well worth watching, and if you have, when was the last time you watched it?

The OARC Film screenings is an open project and we'd welcome people to get involved, especially to help with promotion and to come and show a film. We're always looking for films to show, but we'd like you to get involved in the showing as well. Come and introduce the film and tell us why you've chosen it, and join us for a dissuasion about the film afterwards. More information about how to do screenings is available at our web site at: