I went to the anti-royal wedding street party held on Manzil Way, Cowley on the 'big day'.
I was a bit anxious given how the Police in London, Bristol and elsewhere have seen fit toraid, bully and intimidate anyone not enthusiastically waving their plastic union jacks. So it was rather nice that there were only a couple of cops there, and even they got bored and went off after a bit.

About 30 people arrived to acquire the site at 2 pm, with the crowd growing to about a hundred and more turning up through the afternoon. We listened to music from the Horns of Plenty, had a few beers and chatted with old and new friends. Later on two sound systems and another band turned up. Much dancing and circus skill performances ensued. I left when it started to get dark leaving a few dedicated revellers still raving it up. For once the cops had stayed away and we'd been able to enjoy some mischevious DIY fun, and share our contempt for the monarchy.

A photo of the gathering 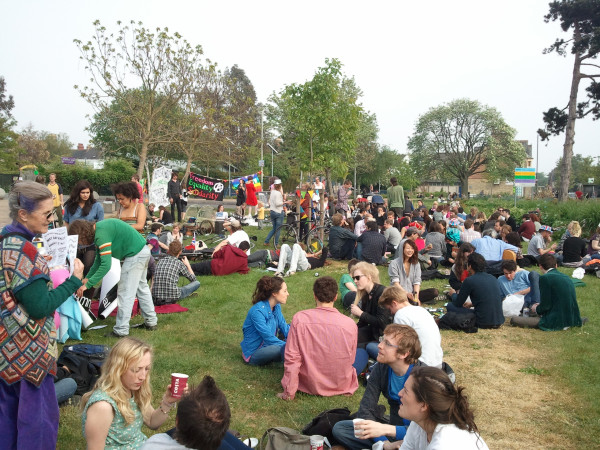 There were some 200 odd people there during the afternoon having a jolly time on the grass, with sound systems and a live band.