Last Sunday OARC was host to two films that told the story of the Poll Tax riots that happened in Trafalgar Square in 1990. 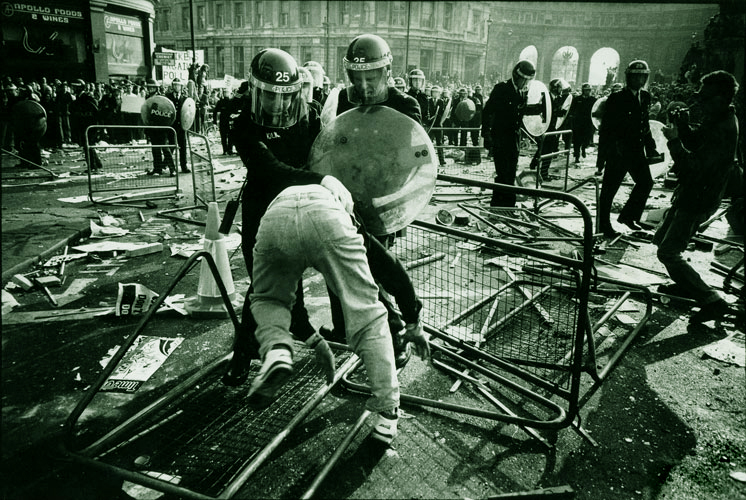 For those that don't remember the Poll tax, you might want to check out the Wikipedia page at

The first film, and fairly highly polished affair, was in the form of a historical documentary. The second, less polished, was more of a 'view from the streets' and included a lot more background about local protests as well as the events in Trafalgar Square. The two films completed each other very well. As the person that introduced the films said, the second was a lot more empowering - more about making things happen yourself rather that only reacting to events.

I was in Trafalgar Square during the riots, but due to my (then) youth, my memories are somewhat hazy. It was both fascinating and emotionally powerful to be taken back to that time. I came awat from the films with two views - how much things have changed, and how much they have stayed the same.

Things that have changed ...

Did we really have no fashion sense? God, we looked terrible! But more seriously, the biggest change I noticed was the police. Hardly any hi-vis tops, the cop fashion du monde was the thick overcoats with the whistle on a chain. And so little tactical co-ordination - little evidence of cops moving, as they do in demos today, as a 'yellow bloc.' It was more like a load of bobbies without riot gear charging down the street. And no kettling.

Things that have stayed the same ...

This was the most disturbing part. The way that the whole mood of a peaceful demo was changed by aggressive and political motivated police. The testimonials from the film and the footage clearly showed that the police wanted the demo to turn violent. And the cops did all they could to make sure it did. From changing the route of the march half way through, to lashing out at people doing nothing more than standing in the street in a non-threatening manner, the cops were clearly up for a fight that day. Perhaps the most disturbing image was one of a police horse charge trampling a protester. Or perhaps it was the tactic of driving riot vans into densely packed crowds at over 30 mph.

The other thing that has stayed the same if the reaction of the mainstream press and mainstream political parties. All of them grossly misrepresented the events, decried the actions of a small number of anarchists and other trouble-makers for ruining the day for all of the peaceful protesters. Absolutely no mention of how the police managed to turn a peaceful crowd into a riot with baton charging and indiscriminate violence.


This was over 20 years ago. I find it sad that the police are still getting away with it, and are supported still by the media, the politicians, and (most sadly) other protesters (Poll Tax protesters showed solidarity - this seems to be in shorter supply nowadays). You could keep the narrative from the films, and replace it with footage from climate camps, the London G20, and the March for the Alternative, and it would still be true - protests experience gross police violence, followed by the protesters being blamed.

As disturbing as I find this, it also motivates me to stronger solidarity with my fellow protesters. I came away from the film screenings with a renewed determination to make change happen. Protest scrapped the Poll Tax. We won. And, with solidarity, we will again.