How to legally cause £300,000 worth of damage: An EDO Decommissioner and Smash EDO activist came to Oxford to discuss the campaign to close a weapons factory that (illegally) supplies key equipment that was used by the Israeli Air Force in the 2009 massacre in Gaza, and is currently being used in other illegal and immoral wars. The fight against EDO continues with Hammertime on 13 October. 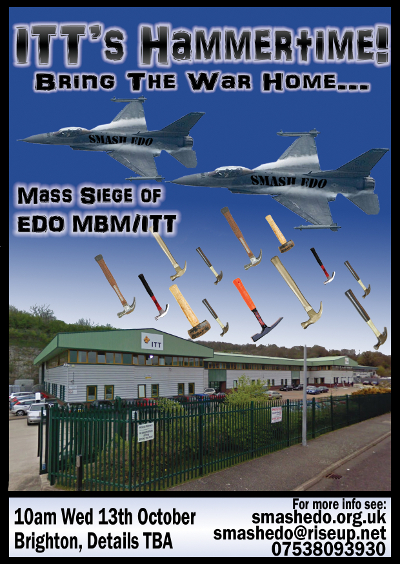 Ornella and Chris came to the Oxford Action Resource Centre (OARC) on Saturday evening to talk about the Smash EDO campaign, the decommissioning action, and Hammertime on 13th October. A packed room heard how a group of anti-military activists in Brighton decided that marching on demos was not enough. It wasn't stopping war. They discovered that there was an arms manufacturer on their doorstep, and decided to close it down. That was 2004, and the campaign has been growing since then.

In 2008 Israel launched operation Cast Lead against people living in Gaza (see background below). Ornella and a group of activists in Bristol decided they could not just stand by whilst innocent people were being massacred with weapons make in Britain. They went to Brighton, met people from Smash EDO, and a plan was hatched.

On the night of 16 January 2009, seven activists broke into the EDO arms factory in Brighton. Armed with only hammers and a sense of outrage, they wrecked havoc by smashing everything in site, and throwing computers and filing cabinets out of windows (and they didn't open the windows first).

None of the activists denied causing an estimated £300,000 of damage. And yet, in July 2010, all were acquitted of any criminal charges relating to the action on the basis that the action a proportionate attempt to stop a greater crime (the war crimes in Palestine).

Many of the things that Ornella and Chris stuck in my head. Some serious and some, to be completely honest, funny in quite a dark way. In no particular order ...

# You don't need much of a plan. The Decommissioners plan seemed to be as detailed as 'get in their and break things with hammers.'

# But perhaps be a bit careful about what you try to smash. The reason it took the police so long to arrest the decommissioners was that one of the things thrown out of the window appeared to be a bomb. Apparently Ornella hit it with a hammer first! (It turned out to be a dummy bomb used by EDO in trade shows - an interesting prop for a company that claims to not be involved in military production.)

# Police evidence can help you. Ornella cut herself quite badly when climbing the fence. She then proceeded to bleed all over the factory - and the police took photos of the blood splatters. In the background of several of these photos where pictures of military planes - again interesting for a company that denied supplying the military.

# It's amazing what arms companies get away with. It seems that EDO have been exporting parts for the F-16 without a proper license, and may have illegally exported beryllium. And yet all police and legal attention is on the activists, not an illegal arms company.

# If you get involved in an action like decommissioning, make sure you have good support networks. The police will almost certainly try to make you life hard, and it's good to have friends to help deal with some of the emotional fallout. And people that can help you build a legal defence are very useful.

# Perhaps most importantly, if you feel passionate about an issue then do something about it.

On 27 December 2008, Israel launched Operation Cast Lead against Gaza. In just 220 seconds, 100 targets were hit in the first air strikes carried out using F-16 planes and helicopters. Over 1,100 Palestinians and 13 Israelis were killed in the three weeks that the conflict lasted. EDO make a key component used in the F-16.