Wedding 'Die-In' Protest at London Afghanistan War Base, Wed 27 May

Wedding Party peace protest at UK Military HQ in Northwood on Wednesday 27 May 2009 against killing of civilians in Afghanistan, on second anniversary of US attack on wedding party, killing 47.
Pictures Copyright (C) Peter Marshall, 2009. All rights reserved. 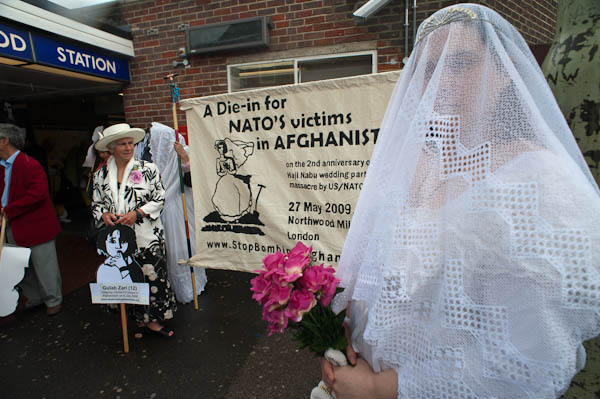 A bride at Northwood station 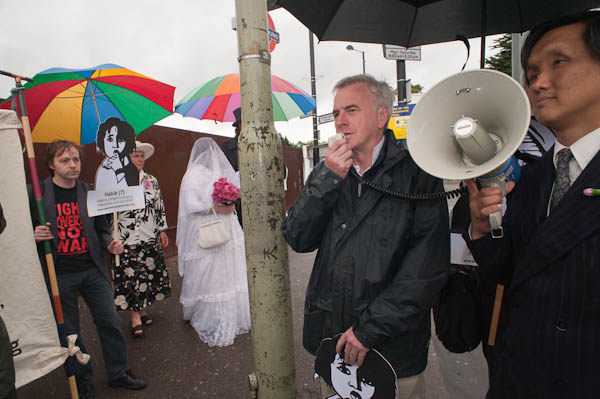 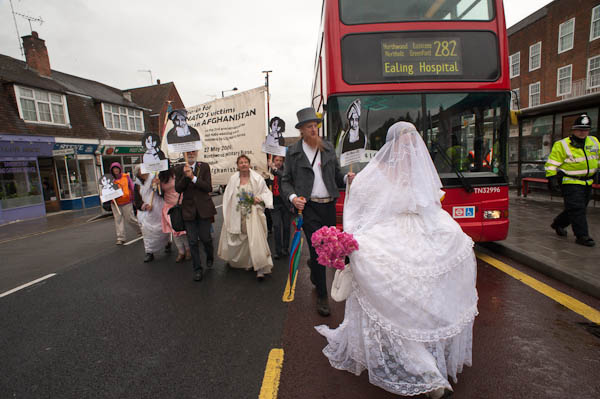 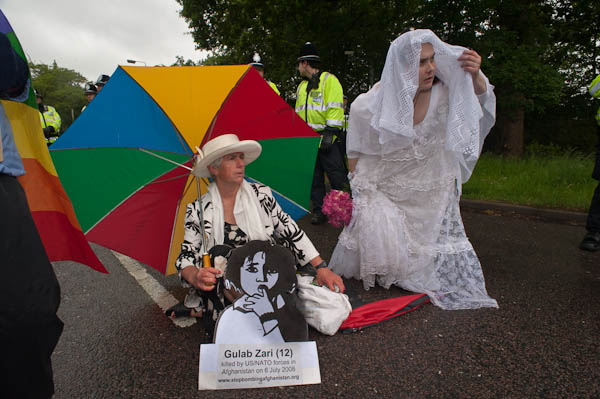 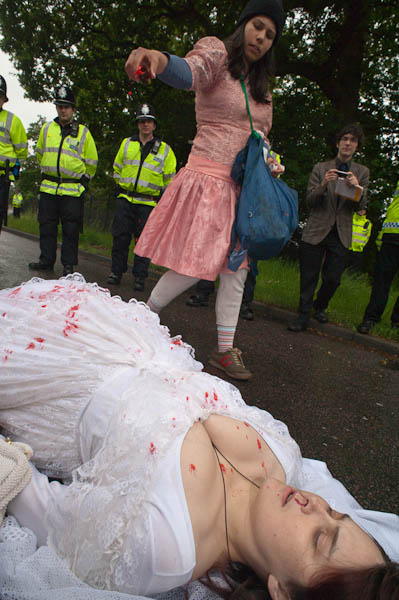 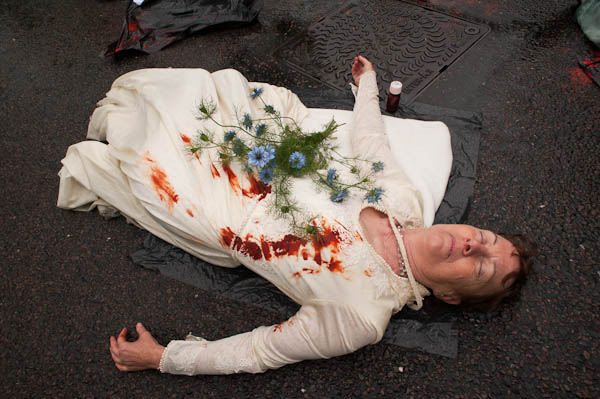 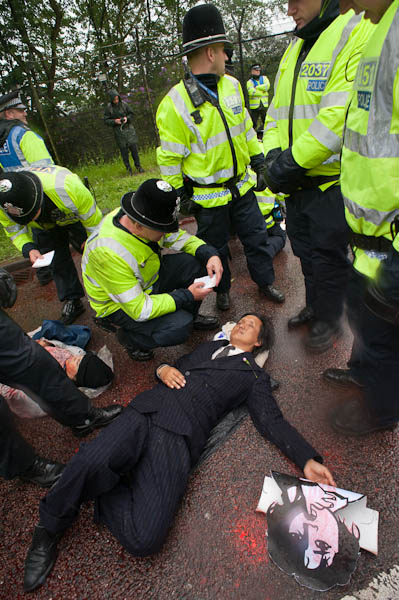 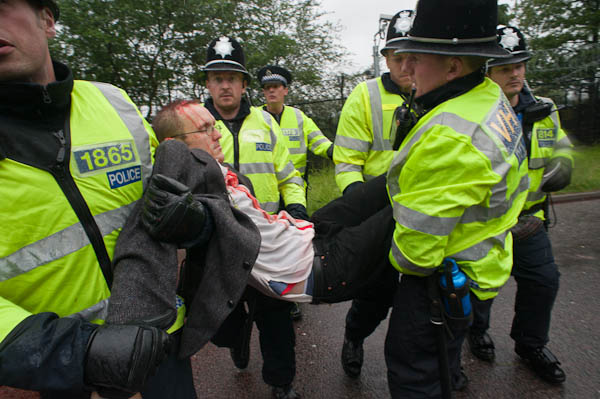 Carrying a protester away

Two years ago today, on May 27, 2007, US forces in Afghanistan bombed a wedding party at Haji Nabu, killing 47 civilians; just one of many wedding parties massacred by NATO or US forces. Thousands of Afghan civilians have been killed by US/NATO forces in the war, and earlier this month, on May 4, around 120 civilians, mainly women and children were killed in an attack in Farah province.

To mark these killings and call for an end to the killing in Afghanistan, protesters from Voices in the Wilderness UK, Justice Not Vengeance and London and Oxford Catholic Workers organised a 'die-in', an act of non-violent civil disobedience close to the main gate of 'HMS Warrior', the land-based military base in Northwood in London from which Britain's forces in Afghanistan are commanded.

It was a cold, wet morning when around 30 demonstrators, dressed for a wedding and including two brides and grooms, met at Northwood station for a march to the base. There were considerably more police than demonstrators, and after some negotiation the police agreed that the march would be allowed to proceed to a wide verge close to the main gate of the base.

On the way there were further discussions about the exact route, but after threatening to block the road with a 'die-in' the march was allowed to reach the road opposite the grass verge on which the police had wanted them to protest, and their path to the main gate, a short distance further on was blocked by a line of police.

The march organisers had previously decided they would stage the 'die-in' at the point they were stopped by the police from going further, and around half the demonstrators lay down on the road. Fortunately the organisers had come with a supply of black bin bags to put on the wet surface, but it was still cold and uncomfortable, and the rain, although light, was steady.

The rest of the protesters began a reading of the names of civilians killed in Afghanistan from the side of the road. Among those taking part in the protest were Maya Evans and Milan Rai who were arrested in 2005 for reading out the names of Iraqis and British soldiers killed in the Iraq War, opposite the Cenotaph in Whitehall. Rai became the first person to be convicted under SOCPA for organising an unauthorised demonstration in the vicinity of Parliament. Also present was Hillingdon MP John McDonnell

The Hertfordshire police had previously given a warning under Section 14 of the Public Order Act. They gave a further warning once people had 'died' on the roadway, but stood watching. After around 15 minutes, a second officer gave a warning that unless people cleared the road they would be moved, and said that they had 5 minutes to decide. Twenty minutes later a final warning was issued, and then groups of police moved to each protester on the road in turn. Each was told they were committing an offence and that unless they moved they would be carried to the side of the road, and that if they attempted to move back on to the road they would be arrested.

Several demonstrators got up and walked to the side, but most waited for the police to move them, which appeared to be done firmly but with minimum force. At one point the officer in charge directed his men to deal with one man before the other remaining protesters because he was obviously shivering and suffering from the cold. And as a photographer the Hertfordshire police made a pleasant change from the Met. For once I was only told to get out of the way when I was really in the way. There were some FIT officers from the Met present - let's hope they take some intelligence back to their force about how to police protest.

I saw one man who came back on the roadway being arrested and led away, but I was told that there were several other arrests; I think all of people who had defied the police injunction not to move back onto the road.

The organisers had intended that the 'die-in' should last an hour; it began at 12.22 and the removal by police started at 12.58 and was complete by 13.08, just three-quarters of an hour after the start. A few minutes later the police agreed to let the protesters march back down the road to the station.