BAD NEWS: The story we are not being told 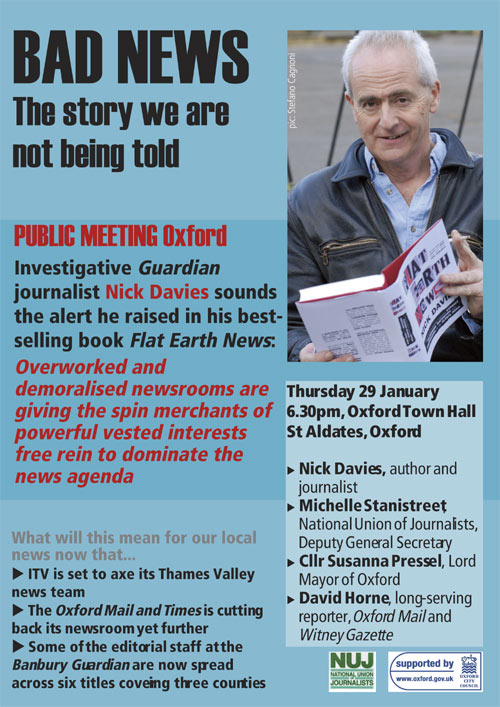 Massive cuts in editorial jobs and budgets throughout local and national newspaper, television and radio newsroom, are prompting mainstream debate over whether the current profit-driven model of news services remains viable.

This debate will open in Oxford at 6:30pm on Thursday January 29th when Nick Davies, investigative journalist and author of FLAT EARTH NEWS, will be speaking at the Oxford Town Hall organised by the Oxford branch of the National Union of Journalists. FLAT EARTH NEWS was one of the surprise best sellers of 2008, and since its publication Nick has been invited to address meetings throughout Europe and even in Canada. The book presents a devastating critique of how government and powerful vested interests succeeded in hijacking the news agenda over key issues such as climate change and the fiction of weapons of mass destruction, paving the way for bulldozing through policies with little public support and disastrous consequences.

Nick traces many of the problems to demoralised and severely understaffed newsrooms, which churn out 'stories' fuelled by a political agenda, without taking the time to check the accuracy of what they are being told or seek alternative credible opinions. Once published, other news outlets pick up the story and regurgitate it as 'news' and before long it becomes seen as established fact.

This problem is mirrored in the local news services, with further redundancies at the Oxford Mail in January, and end of the Thames Valley Tonight news bulletin, as part of itv's wholesale retreat from local news provision.

Strong communities need good news media that keep up with events, provide thoughtful and well-informed coverage and reflect the concerns of people of all ages, cultures and interests.

Who will provide this, and how, while newsrooms are being run down for the purpose of a short-term boost to profits?

The meeting at the Oxford Town Hall is open to anyone interested in hearing more and joining the debate.