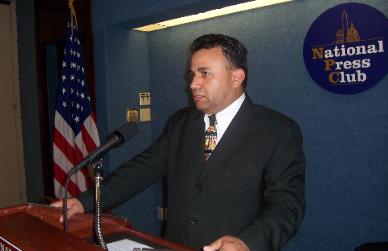 A new program has been launched to create awareness about the Baluchistan situation in the U.S. capital.

Called “Baluchi Ha'al” the monthly program will be held at the Savory Cafe in Takoma Park on the outskirts of Washington D.C., on the last Saturday of each month.

The topic of the August program is “Baluchistan-- two years after the assassination of Nawab Akbar Khan Bugti, former governor and chief minister.”

A message from Nawab Brahamdagh Bugti, president of the Baluchistan Republican Party , to the American people will be the key feature of the Baluchi Ha'al meeting in August.

The main aim of the program is to connect U.S. think-tanks, academics and media with Baluchistan society, and vice versa.

“Ha'al" in Baluchi stands for exchange of briefs and notes, which has traditionally been done by the word of mouth in Baluch society. In Baluch gatherings, people repeatedly ask “hala'an daiy,” or how are things.

The program will include speakers presentation, reading of articles, and playing of taped messages of key players in Baluchistan politics.

Visiting Baluch scholars from Pakistan , Iran and Afghanistan , activists, politicians and professionals will be invited to the monthly event, rain or shine. Progressive and secular scholars from other nations, who take an interest in Baluchistan society and politics, will also be invited as speakers. The only caveat is that all guest speakers must believe in the right to self-determination of the Baluch people.

The program has been sponsored by the American Friends of Baluchistan, a voice for the Baluch in the U.S. capital.

About the American Friends of Baluchistan:

Baluch and Americans concerned over the ongoing genocide and ethnic cleansing in Baluchistan joined hands in Washington D.C. to launch the American Friends of Baluchistan in the wake of the assassination of former chief minister and governor of Baluchistan, Nawab Akbar Khan Bugti, in August 2006.

The stated goal of the organization is to create awareness of the need of a safe, independent, and secular peaceful Baluchistan in southwest Asia . The organization will advocate for the establishment of an independent and impartial War Crimes Tribunal to try individuals responsible for crimes against the Baluch people.

Founded by Baluch journalist Ahmar Mustikhan, the organization's president is Robert Selle, contributing Editor of the World & I, a publication of the Washington Times Corporation . Dr Wahid Baloch, a prominent Baluch activist, is the general secretary of the American Friends of Baluchistan.

Bugti was the highest elected official to be killed by the Pakistan Army . Since March 27, 1948 when Balochistan was forcibly annexed by Pakistan, many top Baluch leaders, including Baluch ruler Khan of Kalat Mir Ahmedyar Khan and Chief of Jhalawan Nawab Nauroz Khan were arrested and humiliated by the Pakistan Army. Thousands of Baluch freedom fighters and more than 5,000 Pakistan soldiers have been killed in five army operations to crush the Baluch resistance movement.


The organization will focus on all occupied Baluch territories. " Nuclear testing on the soil of Baluchistan is a common practice," the organization notes with concern.

The organization's mission statement is to "Unite Americans and Baluch living in the U.S. into a non profit organization, the goal of which is to create awareness of the need of a safe, independent, and secular peaceful Baluchistan in southwest Asia."

The organization's founder is of the considered opinion that the Khan of Kalat, Beglar Begi [Prince Among Princes] Suleman Daud Ahmedzai is the De Jure ruler of Baluchistan.


The American Friends of Baluchistan goals and programs would be:

1. Provide a continuous flow of information to the U.S. government,
public, and non profit institutions about the situation in Baluchistan.
Promote Baluch visitors to the United States to speak before public
organizations with the intent of building support among existing non
profit organizations that would take Baluch under their wings.

2- Monitor and highlight the human rights conditions of the Baluch in
Iran and Pakistan. Interface with existing human rights organizations
who rarely consider Baluchistan so as the help break the silence that
facilitates impunity for those who kill and torture. Help Baluch
opposition groups that are targets of victimization by Pakistani and
Iranian state forces.

3. Advocate for the establishment of an independent and impartial
War Crimes Tribunal to try individuals responsible for crimes against the
Baluch people. Network with existing organizations that might address
legal aspects of evidence and procedures that war crimes tribunals
require to participate.

3- Help end the nuclear programs of both Pakistan and Iran. Nuclear
testing on the soil of Balochistan is a common practice. At the least, the Chagai test range should be opened for international inspections. But inspections should not diminish the goal of making the entire region a nuclear free area.

4- Counter the state-sponsored trend of promoting Talibanization and fanaticism in Baluchistan by government of Pakistan . The alternative to Pakistan's machinations can only come from an informed and involved western influence. Sadly, most Baloch feel that
the western world does not appreciate their community, human rights and
culture of civility that is most closely related to modern western world values. VOA and other media need to communicate with Baloch to help rectify this misconception.

5- Find peaceful but effective ways to help Baloch resist Pakistani army expansion (cantonments) on Baluchistan soil. Advocate the immediate withdrawal of all Pakistani and Iranian army personnel from Baluch soil. This might be considered as a counterpart of what the United States did, very successfully, for the Kurds prior to the overthrow of Saddam Hussein .

6- Through public media, such as the VOA, sponsor programs that emphasize the age-old Baluch traditions of respect for all great religious traditions of the world, especially Christianity, Hinduism, Judaism, Buddhism and sufi Islam.

About the City of Takoma Park:

Takoma Park is in the vicinity of Washington DC. First planned as a commuter suburb, the City of Takoma Park was founded in 1883 by Benjamin Franklin Gilbert along the Metropolitan Branch of the Baltimore and Ohio Railroad .

The City of Takoma Park has 17,229 residents, as of the 2000 census. These citizens are unusually diverse in age, ethnicity, language, economic condition, and length of residence. We are also the home of many writers, musicians, and artists.

Over seven hundred businesses and non-profit organizations are located in Takoma Park, most of them small. Takoma Park is a sanctuary city, an official "Tree City, USA", and is also widely known as Azalea City. It is a nuclear free zone , has an award-winning recycling program, and supports the work of historic preservation groups .