Seventh Annual Claudia Jones Memorial Lecture dedicated to the memory of the pioneer of Black journalism in Britain. This year's lecture will be delivered by Dr Robert Beckford, Reader in Black Theology and Popular Culture at Oxford Brookes University. An award-winning broadcaster for Channel Four, Dr. Beckford's lecture will explore how understanding "whiteness" offers an important strategy for community cohesion and democratic inclusion. 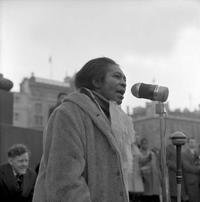 Dr. Beckford is a reader in Black Theology and Popular Culture at Oxford Brookes University. An acclaimed BBC and Channel Four broadcaster, a presenter of the Sunday Morning Show on BBC WM, his journalism work is known for tackling controversial subjects in an engaging and popular style, such as Jamaican Independence, Gospel Music, Reparations and the rise of fundamentalist Christianity. His recent documentary Undersize Me was broadcast on Channel Four on September 23.

Dr. Beckford said: “It is a great honour to be asked to deliver the Claudia Jones Memorial Lecture. The black community, especially the black church, needs to be more socially engaged and it needs to fight more vigorously the battles that black people face. “

An accomplished author of several books, including God and Gangs, a theological take on the rise of disaffection among black urban youth, and Jesus Dub, which addresses connections with the African Caribbean church and the dance hall and his book .

Like Claudia Jones, pioneer of Black British journalism and founder of the West Indian Gazette, the first country’s first Black-British paper, Beckford is a firm believer in teaching for social change and he educates in community centres, care homes and male prisons.

Beckford said: “As part of the Caribbean diaspora in Britain, my theological and journalistic work cannot be removed from the concrete world in which I live. Faith without engagement with the socio-political world is ‘faith without works’.”

The lecture is sponsored by the Mayor of London, who donated the use of City Hall for the event, and is part of the city’s Black History Month events.
Chair of the NUJ’s Black Members Council Lionel Morrison said: “It is a privilege to have Dr. Beckford deliver the 7th annual Claudia Jones Memorial Lecture. He’s community-focused and like Claudia Jones has strived to educate and empower people in his life, work and journalism.”
-ENDS-

Notes to Editors
To attend the free event, email your seating requests to:

Members of the public interested in attending the event are encouraged to book their seats early. Guests are asked to arrive at City Hall, The Queen's Walk, More London, London SE1 2AA by 7 p.m. to undergo security clearance. The lecture will start promptly at 7:30 p.m. and latecomers may not be admitted. City Hall is about ten minutes walk from London Bridge Station and 15 minutes from Tower Hill. For directions to City Hall, please visit

For further information about the event please contact Lena Calvert, NUJ’s Equality Officer at 0207 843 3727 or by e-mail at

About Claudia Jones
Claudia Jones was a political activist, journalist and community leader, who dedicated her life to the struggle for workers’ and equal rights in the 20th century. Born in Belmont, Port-of-Spain, Trinidad in 1915, at the age of eight, she moved to Harlem, New York with her parents and three sisters and lived in impoverished conditions. For more than 30 years, she lived in New York and became an active member of the American Communist Party and developed her journalism and community leadership skills. After World War II, during the McCarthy era when the US government jailed and deported many blacks and communists for “un-American activities,” she was imprisoned four times by the U.S. government. By 1948, she was the editor of Negro Affairs for the party’s paper the Daily Worker. In 1955, she was deported from the US for “un-American” activities and given asylum in England and lived in Notting Hill. Above a barber’s shop in Brixton, she founded and edited the West Indian Gazette, the first Black newspaper in Britain, which campaigned for an independent and united West Indies, justice for blacks in Britain and world peace. She worked as the paper’s editor until her death, encouraging the most talented Black writers of the time to contribute to the paper. She worked to create links between political campaigns and cultural activities; she established the first ever West Indian Carnival in 1959, which continues every year on the streets of Notting Hill. She died on Christmas Eve in 1964, aged just 49, due to a heart condition and tuberculosis. She died alone and broke and it was around 48 hours before her body was discovered. She is buried in Highgate Cemetery next to Karl Marx.

About Dr. Robert Beckford
Born to Jamaican parents in the Midlands, Dr. Beckford grew up in the Pentecostal Church. He studied religion and sociology at Houghton College in New York. He returned to the UK to study for an MA in Hermeneutics at the then London Bible College, Middlesex, which is now the London School of Theology. He studied for his PhD at Birmingham University. A teacher for most of his life, he first taught adult literacy at Bourneville College in the early 1990s. While studying for his PhD, he worked part-time at Queen’s College, now part of the Queen’s Foundation, where he became Britain’s first tutor in black theology (1992-8). He joined the University of Birmingham as a research fellow in 1999. His initial work focused on how film could be used to teach religion in prison to empower black and Asian offenders, including arranging a course on Islam and Christianity at Feltham Young Offenders Institute. From 2001, he was a lecturer in African Disaporan Religions and Cultures at the University of Birmingham. He joined Oxford Brookes University as the Reader in Black Theology and Popular Culture in January 2007.

Apart from teaching, he has presented a number of documentaries for the BBC and Channel 4 covering a range of subjects, including Jamaican independence, the rise of Fundamentalist Christianity, the Bible and Patron Saints. He received a BAFTA in 2001 for diversity in educational broadcasting. He is currently the presenter of the Sunday morning Show on BBC
WM. His recent documentaries include: The Secret Family of Jesus December 2006, Channel 4, exploring historical evidence that Jesus had numerous siblings and a deep friendship with Mary Magdalene; Ghetto Britain, October 2006, More4, which explored whether the 30th anniversary of the Race Relations Act had embraced the multicultural dream or created a multi-million pound race relations industry. His recent publications include: Jesus Dub: Faith, Culture and Social Change (2005); God and Gangs: Urban Toolkit for those who Won’t be Bought Out, Sold Out or Scared Out (2004). He is married with one child.

About the National Union of Journalists
The NUJ is the biggest and most-established journalists' unions in the world, with 35,000 members. These members cover the whole range of editorial work – staff and freelance, writers and reporters, editors and sub-editors, photographers and illustrators, working in broadcasting, newspapers, magazines, books, on the internet and in public relations. The union was founded in 1907 and has fought for journalists, their pay and conditions, their working rights and their professional freedom ever since. The NUJ has held on to these values through war and peace, boom times and recessions. Despite the attacks in the UK on trade unions and independent journalism, despite the supposed fall in public appreciation of our members' work, we are thriving. The NUJ's membership has been rising steadily for the last four years. We're the union of the past, present and future. For more information about the NUJ, visit: www.nuj.org.uk

About the Black Members’ Council
The NUJ Black Members' Council (BMC) was created at the Annual Delegates Meeting in 1990. The Council consists of 16 members -- eight elected by an annual conference of Black Members and eight by the whole membership of each of the six industrial sectors (Magazine and Books, Press and Public Relations, National Newspapers, Broadcasting, Provincial Newspapers, Freelance) and the two regions (Ireland and Scotland). Industrial councils are lay representative bodies in the union which supervise its industrial work -- negotiations and agreements with employers on wages and conditions of employment. The representation on industrial councils is extremely significant because it introduced for the first time the issue of equality -- whether it is job discrimination or questions of ethical performance -- at the heart of negotiations with media organisations. The NUJ also has a seat on its ruling body -- the National Executive Council -- for a representative of its Black members. For more information about the BMC contact Lena Calvert on 020 7843 3727 or e-mail

2004: A. Sivandan, Director of the Institute of Race Relations and editor of 'Race and Class'. Has written works on Black struggles in Britain including 'Communities of Resistance: Writings on Black Struggles for Socialism' and 'A Different Hunger - Writings on Black Resistance.'

2005: Lord Herman Ouseley, former chairman of the Commission for Racial Equality and currently the Managing Director of Different Realities Partnership, a specialist equality diversity and people management consultancy.” Integration or Segregation. Who sets the agenda?”