Common Ground - a squatted community garden in Katesgrove, Reading - is still being enjoyed by the community and still growing, despite a 2nd attempt by the council to close the garden down and evict the gardeners.

The council owned land, which backs onto several derelict buildings, was occupied by nearby squatters and local activists in January this year. They spent four months transforming a rubbish strewn junkyard into a beautiful garden, relying on recycling, donations and self-organisation to get the job done.

On May 19th the garden was opened to the community, despite the Council obtaining an injunction making the opening BBQ and acoustic music gig illegal. Nearly 200 people came through the garden, and all were amazed at the difference. Since then, locals have been using the garden regularly to relax and eat lunch in, or take the children to the play area.

In June, the Council obtained an possesion order for the squatters home and Common Ground. On 20th June, despite leaving their home, the squatters, gardeners, activists and local residents teamed up to resist the eviction of the garden, with a few residents being prepared to break the law to continue occupying the land. Council officials/bailiffs showed up, and pretty quickly retreated, leaving everybody to enjoy another party.

In the last few weeks, the Council have unsuccessfully attempted a second eviction. In late July, once again gardeners, neighbours and activists mobilised to defend the garden from eviction, once again defying the law and once again seeing Council officials retreating empty handed. And last Sunday, despite intimidation as the Council threatened unnamed organisers with jail, several people enjoyed a community picnic and arts day in the garden, creating a brand new mozaic pathway.

Maintaining the occupation of the land is not the only success of Common Ground. In a badly thought out attempt to move the occupiers, the Council offered two alternative sites. However, when the gardeners refused them, the Council were obligated to offer them to the local residents association. Individuals involved in Common Ground have met with the residents association, and it is likely they will help the residents to create a second and possibly third community garden for the area, this time legally. Direct-action gets the goods!

Even better, Common Ground is apparently inspiring others to take direct-action to improve their neighbourhoods. On the other side of a Reading, a lady who had been refused permission from her housing association to create a community garden on some of their derelict land, has told people involved in Common Ground that she has now been inspired to go ahead and do it anyway! Naturally, some Common Ground gardeners will offer advice and assistance with this new project.

Common Ground is located through the alleyway, next to the ex-Womens Information Centre in Silver Street, Katesgrove, Reading, 10 minutes from the train station. Please email katesgrovegarden(AT)yahoo.co.uk for more information.

Photos from the Arts Day 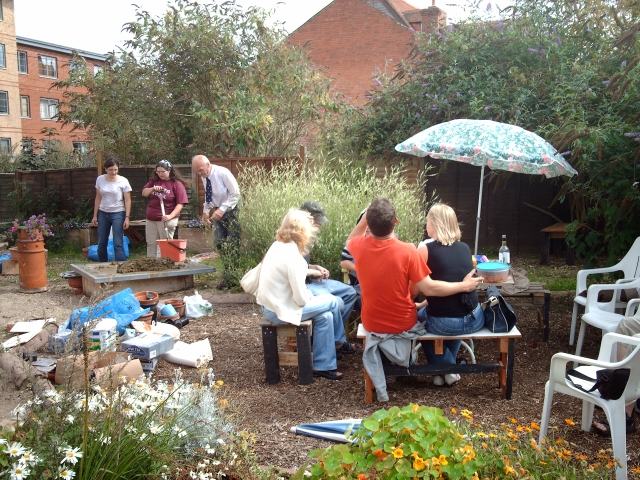 Common Ground in its splendour 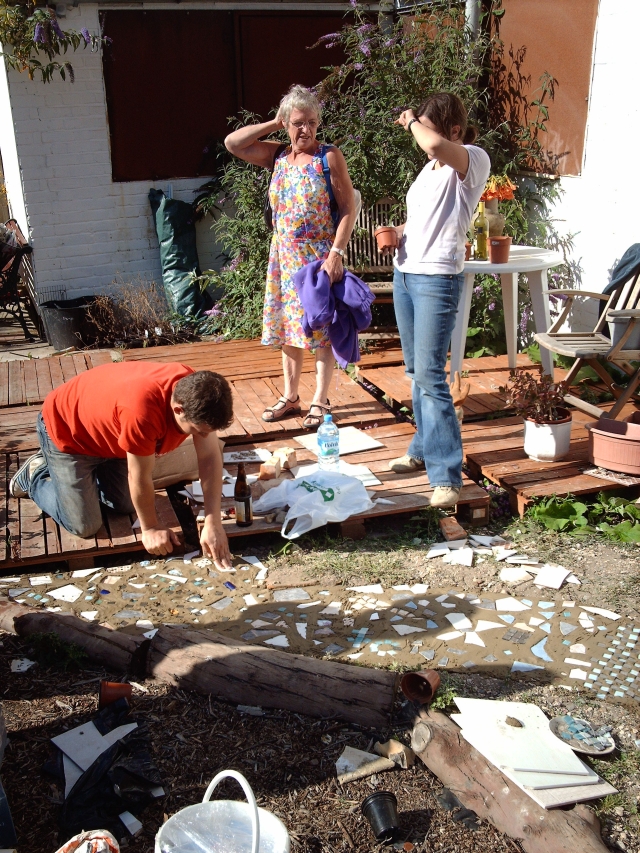 The mosaic artists in action 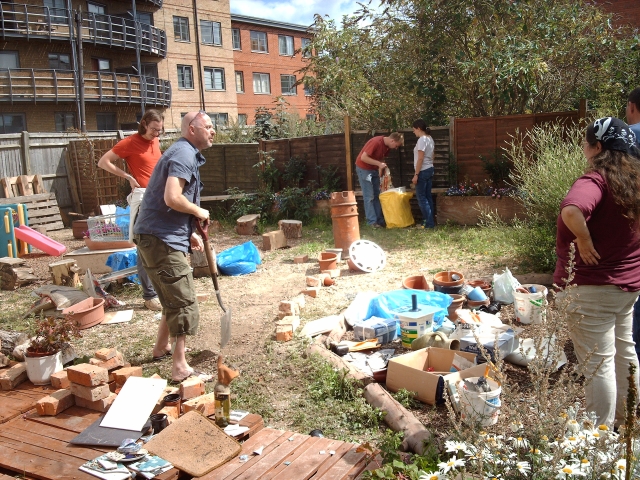 A few images from Sunday's Arts Day. The garden is now looking particularly nice, with many flowers in full bloom, and now a mosaic path.

Reading Museum has some particularly fine examples of Roman mosaics excavated from the local area. I somehow doubt if Common Ground's will still be around in 2000 years, but I feel that the moasic-makers have still carried on the local tradition!

Do come along and admire, before the Council killjoys get their way and destroy something so beautiful.