At the beginning of this year a group of friends came together with a shared purpose: to create an open space within Reading's concrete jungle, where people could take a breather from the stresses of modern life and relax with their friends and neighbours. Having discovered a plot of land within the Katesgrove area, left to ruin by Reading Borough Council, they got to work.
Four months later and the Common Ground Community Garden was opened to the public. People from around the local area and beyond enjoyed a barbecue, live music, friendship and relaxation in the sun. However, this came in spite, not because of, the efforts of the council. Two days before the opening, they served the garden with an injunction, demanding that it be closed down and occupants of the adjacent squat be evicted.

Their grounds for this - that their "principle concern is with the health and safety of members of the public" - is a sick joke. The land which became Common Ground had been left abandoned for years, during which it became a home for drug addicts on numerous occasions. Dozens of used needles, discarded condoms and broken glass littered the site, which was ignored by the council and open for anyone to accidentally wander into and be injured. Under the council's control the land posed an extreme danger to anyone who entered; it is only now, when it has been cleared and put to community use, that they are willing to show concern.

This is no coincidence. Reading Borough Council - like many others - seems determined to bring an end to anything connected to notions of community or greenery, in favour of things that reek of power and wealth - 'development' as they call it. As this is most likely their goal, they would sooner have the land abandoned than put to some kind of use. However, we argue that 'council property', can also be known as 'public property' - they are simply looking after it for us. And, considering the job they are doing, we say they have had their chance and now we, along with every member our community, should democratically decide it's future.

On Friday 25th May the injunction case will be brought to court. The council's aim, as quoted in the Reading Evening Post, is to "secure the site pending imminent demolition of existing derelict property and disposal of the land." They will not get away with this without a fight. At 10am on Friday, supporters of the garden will be gathering outside Reading Court to show the council that we are willing to defend the few community and green spaces we have left, and will create more, to come together on truly Common Ground.

We would also encourage people to get in touch with Reading Borough Council and let them know how you feel about the way they are spending your money. E-mail 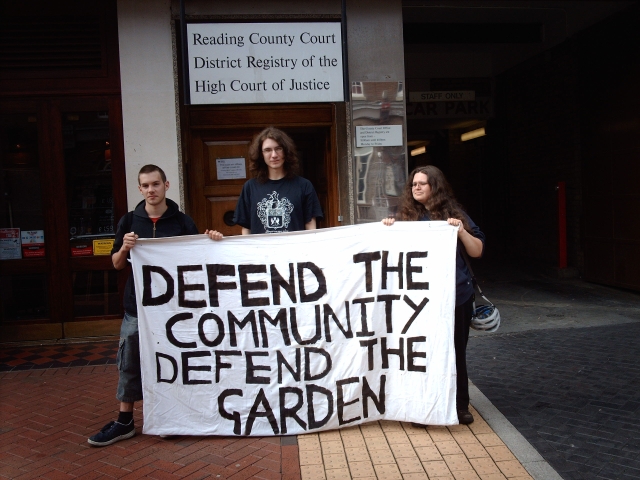 Almost a dozen people turned up at Reading County Court to support the Common Ground garden. Two of the gardeners were in court to defend themselves, without legal support, against Reading Borough Council's injunction. Unfortunately, the judge upheld the injunction - the gardeners are prohibited from opening to the public until 31st December 2007 (presumably RBC anticipates getting rid of the site before then).

The garden has gained enormous local support and publicity, including extremely sympathetic articles in both the local papers and on Meridian TV. The gardeners are determined to continue somehow.