Today (25th April) Oxford City Council's Strategic Development Control Committee met to discuss the future of one of Oxford’s last remaining unspoilt open spaces, Warneford Meadow. The Committee decided not to make a decision on the application as it stood, and so the fight to save the meadow goes on. 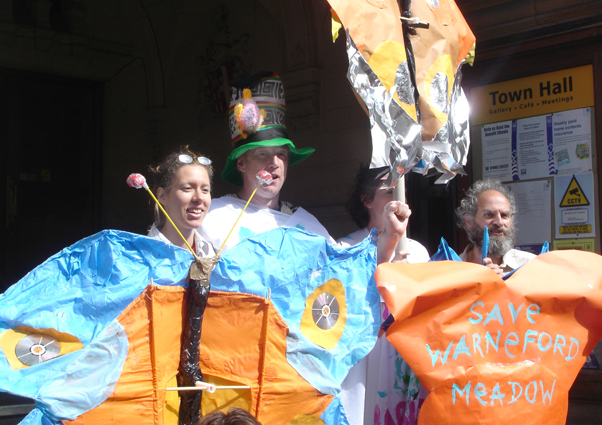 Protest against building on Warneford meadow 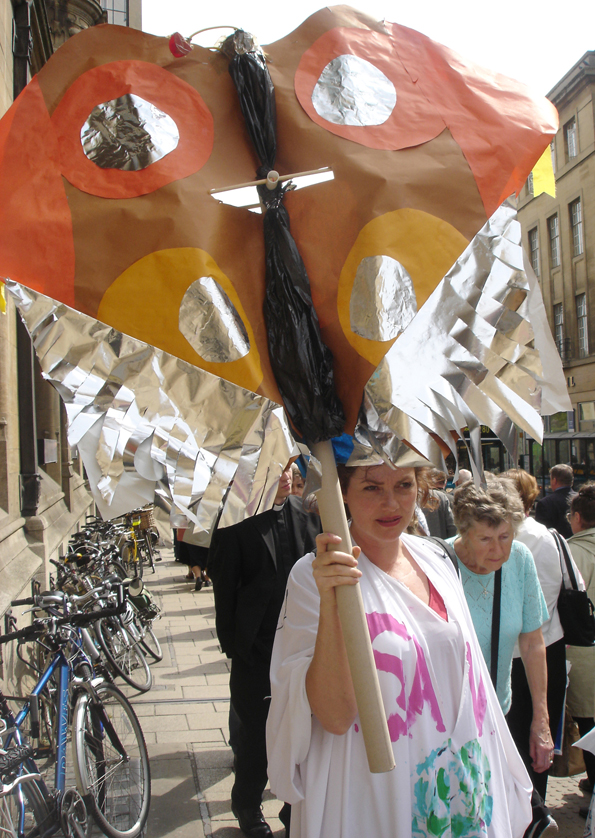 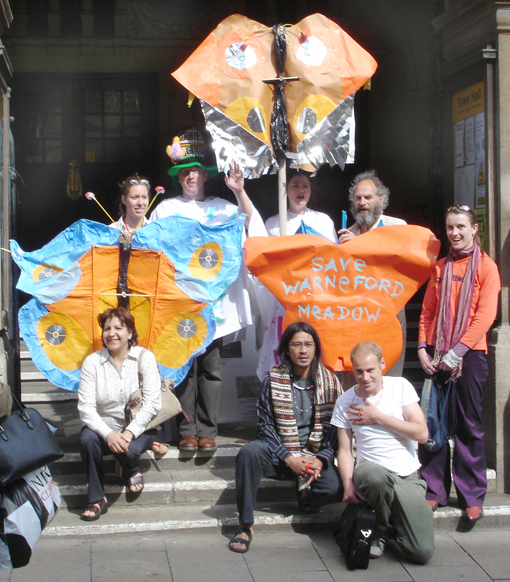 Demonstration outside the Committee meeting

Patients in the Warneford psychiatric hospital, local residents of the four neighbouring parishes, dog-walkers, cyclists and walkers all use and appreciate the meadow as a haven of peace and tranquillity in an otherwise increasingly busy and stressful city.

However Oxfordshire and Buckinghamshire Mental health Trust and the Oxford Radcliffe Hospitals Trust want to sell the land to a developer for £30 million.

The trust says it wants to build student and key-worker housing on the land, which is a precious natural resource for the inhabitants of Oxford, and is full of wildlife, including rare birds, butterflies and insects.

To further their cause, the friends of Warneford Meadow have put in an application for Town Green status, which is intended to protect common land from destruction. Paul Deluce, one of the friends, is the named applicant.

Campaigners were encouraged by the success of a similar legal action, taken by Catherine Robinson, to protect the Trap Grounds in North Oxford. This went all the way to the House of Lords and won, thereby setting an important precedent under English Law for campaigns like this one.

Local residents campaigning to save Radley Lakes near Abingdon are pursing a similar course of action to stop Npower destroying another place of great natural beauty.

I have just spotted a GLARING and potentially embarrassing/undermining mistake in a recent article to Indymedia submitted on 25/4/07 by campaigner and local artist Jo Maquettes, including my copy and her photographs. From our little butterfly demonstration on the steps of Oxford Town Hall (where a crucial meeting of the Strategic Development and Control Committee was taking place which could have decided the fate of the Meadow, but in the end did not), I dictated the article to Jo, which she jotted down in her notebook and went to the nearby internet cafe to submit to Indymedia, along with some of her photographs. In the copy, it says that the NHS Trust which owns the Meadow (Buckinghamshire and Oxfordshire Mental Healthcare Trust) is hoping to sell the land to developers and raise "£30 (THIRTY) million". In fact the figure, as far as we are aware, is around £13 (THIRTEEN) million. Although I did check Jo's notebook (in haste), I didn't see anything wrong with the text, so I don't know exactly how the mistake was made.

Please, please, if there is a way to do this, PLEASE change the figure quoted in the body of the text from £30m to £13m. This is precisely the sort of mistake which can open us to all sorts of claims by our opponents, such as gross exaggeration, media manipulation, lack of professionalism, youth, inexperience and ineptitude, etc.

b.t.w. For anyone who is interested in this kind of thing, this is a notoriously easy mistake to make when, for example, broadcast news turns into text (eg. the BBC World Service transcription of reports by English correspondents from all over the world into 40 or so other languages; or the challenging move onto the web, when all our reports were not just translated but also BECAME text when the BBC News site got up and running - one of the busiest in the world today). Which is why, when you are standing by a busy main road, caught up in traffic/gunfire/demonstrations etc., you would always spell such words out loud to 'Traffic' (the name given to the BBC's central recording bank for all national and international correspondents, and the ONLY people you speak to on a daily basis while you're abroad, so they're more like parents - except they're really nice. I digress, but this is funny: My stepfather, Jeremy Cullen, once drew me a cartoon when I was the BBC's Madrid correspondent and could barely make myself heard, even in my own flat. It goes a bit like this: "Hello?..."(crackle, crackle...) "Hello??..." (crackle, hiss...crackle...) "Traffic???..." (crackle... hiss, pop... crackle, etc. with increasingly lonely and desperate foreign correspondent in some god-forsaken place, a long way from home and the Shipping Forecast...). That really was the scenario in Colombo; but in this case, I'm sitting in my little flat in the historic centre of the Spanish capital, comfortable at my little desk, wearing headphones and holding the mic, with banks and banks of cars visible in the narrow street below, honking their horns and puffing out carbon-monoxide. Hilarious. I do have it somewhere.

Anyway, I'd like to take this opportunity to thank Jo for all her hard work on 24th and 25th April. She came running after I sent word round that I needed help building butterflies for a demo the following day. We had fun going to this amazing recycling place, Orinoco Stores, and working out how to make giant butterflies out of kites. I have been trying to develop the butterfly as a symbol of Warneford Meadow, or a symbol which has a wider application than that: which could be used by all campaigns to save natural spaces from destruction, anywhere in the UK or anywhere else. There is no copyright on this! Any help gratefully received. Ditto with the rainbow, which I've been handpainting and using as a background for all posters/leaflets, etc. Like everyone in Europe did, and to a lesser extent here, over the invasion of Iraq.

My work on the campaign is sensitive because I'm not officially part of the Friends of Warneford Meadow group; neither, as a journalist, do I want to be. Nonetheless, I am coming up with ideas and trying to carry some of them to fruition. I sense an urgent need to radicalise the campaign and tap into Oxfords's grass-roots activist network, the hippies and the pagans, the musicians, writers and poets, the families who like al fresco dining, kite-flying, etc. Who like kids and nature, and want to preserve our environment for their future. Please help me to connect with some of these people: I have been trying but am feeling burnt out at the moment and in danger of becoming too much of a 'One Woman Show', which I have no wish to stage. I'd particularly like to get Radical Roots involved now that Martin Shaw is back in town. He could be a real asset to this campaign. I have offered to take him round the Meadow and show him the new fence, which prevents patients at the Warneford psychiatric hospital from enjoying the Meadow (which I believe, since the land was paid for partly by public subscription in Victorian times "for the enjoyment of the patients at the Warneford", could be illegal) and talk about the Town Green campaign. I really need a good lawyer to talk to about this as well, if anyone knows of one. I'd like to include patients at the hospital as a 'community', as defined by the Town Green legislation. The Friends are hoping to prove that the 4 parishes abutting the Meadow form a 'community'; I would argue that the community which uses the Meadow is far broader than that, and in the case of mental patients, possibly allowed access to the Meadow by law - in perpetuity? It's possible, but I'm not a lawyer.

I'd also like to thank Ed Pope, John Tatlow, and Malcolm Watson for building butterflies in our back garden and my landlady/housemate Louise Spackman for putting up with chaos for a couple of days. Thankyou to Isabel for filming both the demo and the Warneford Meadow picnic on Bank Holiday Monday 7/5/07. I am hoping/impatiently waiting for her video/interviews to be released on Indymedia, if they havn't already been. Thanks to Rachel, Ed, John, and others who came along on 25/4/07 and didn't mind singing the Findhorn song 'We all come from the Goddess' (my idea) all the way up Iffley Road and on the Town Hall steps. We were too late to greet the councillors as they entered the sacred chamber, but we got a lot of attention from passers-by on one Oxford's busiest roads, especially children on school trips and Japanese tourists, so you never know. Thanks to my old schoolmate, Annabel Eyres from the Save Radley Lakes campaign (also going for Town Green status - this is a national issue), Lou's friend Juliet and their kids, Dave from Oxford community choir and daughter, Carl whose father Harold heads Mile Way Gardens Residents' Associaion, and I'm sure many, many more. Catherine Robinson, for a start, without whose Trap Grounds campaign none of this would be possible. I'd like to talk to Catherine as well, if anyone knows how to get hold of her. We worked at Oxfam together and were in the same bookgroup, once upon a time, but have lost touch.