Update (15/02/07): Tree felling and preparation work has started, and sporadic actions are taking places to try to block this work. More help is needed.

Update (06/02/07): The eviction took place on Tuesday 6th February. Bailiffs wearing balaclavas smashed their way in through a set of downstairs windows early in the morning, but it still took them several hours to clear the house after one of the squatters locked on. "We may have lost round one but we will re-group and consider our next course of action. We are not finished yet[...]" - quote attributed to one of the squatters by the Oxford Mail.

URGENT CALL to defend the occupation of Sandles, Thrupp Lake.

On Wednesday 24th January, energy company RWE Npower was granted an order to evict this lakeside property with immediate effect. Meanwhile, at the property extremely robust defences are being built with a view to delaying the destruction of this area of outstanding natural beauty. This is an URGENT CALL for people to join them in resisting the coming eviction. Please phone the site mobile 07772 055 384 straight away.

Npower, who run the notoriously polluting Didcot Power Station, want to fill the lakes with toxic fly ash, a by-product of coal-burning.

A massive campaign by local people has been ignored by both company and the authorities. Oxfordshire County Council has so far facilitated npower's dumping. The habitat is home to many protected species, including water voles and rare orchids. There have been reported sightings of otters. Further expertise is requested to gather further evidence of the ecology of the lakes. Boats are also very welcome at the site. 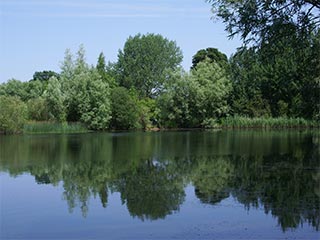 You are invited to join cyclists from across Oxfordshire in a bicycle ride in support of the campaign to "Save Radley Lakes" next Saturday.

Cyclists in Oxford are invited to congregate in Broad Street, Oxford City (OX1 3AS) outside the Oxford Campus Store, at 12.45pm on Saturday 10th March, 2007, while walkers from Abindgon and Didcot are invited to congregate at
1.10pm in Abbey Meadow (OX14 3JE) in Abingdon to hear speakers, then walk to Thrupp Lake. The cyclists will proceed toward Radley Lakes, with bells, whistles and banners, coinciding with a march by Save Radley Lakes the same day at Thrupp Lake at
1.55pm.

Everyone is welcome to join the cycle ride as a planned show of support for the campaign, and the ride will end at the lakes. Bring bells, whistles and banners if you can. The ride will take place at a leisurely pace.

Radley Lakes have been used by Oxonians for over 30 years as a leisure site to walk, cycle and enjoy the environment. NPower has filled all the lakes east of the railway with ash, and now it wants to destroy the remainder in the same way, completely destroying habitat for many species of birds, fish, animal, and plant.

News of the cycle ride is being broadcast to Cyclox, Critical Mass, Sustrans, CTC, and of course Save Radley Lakes.

Cyclists are angry that the NPower's damage to the lakes will also ruin the beautiful views of the lake environment on the Sustrans cycle route than runs between two of the lakes, and there are reports that NPower's site workers are already taking liberties with the cyclists "right of way" blocking the path to cyclists.

An experienced cyclist will lead the ride along an official cycle route from Oxford to Thrupp Lake
(distance 5 miles).

Feel free to forward this message to people or groups who you think might be interested, or email