"Put me down! I won't bring you happiness" More Buy Nothing Day Pixie-ing

A merry band of Oxford pixies full of the joys of the season visited many, many shops - including Miss Selfridges, Topshop, Gap, HMV and Dixons - placing thought-provoking stickers in dressing rooms and on products. 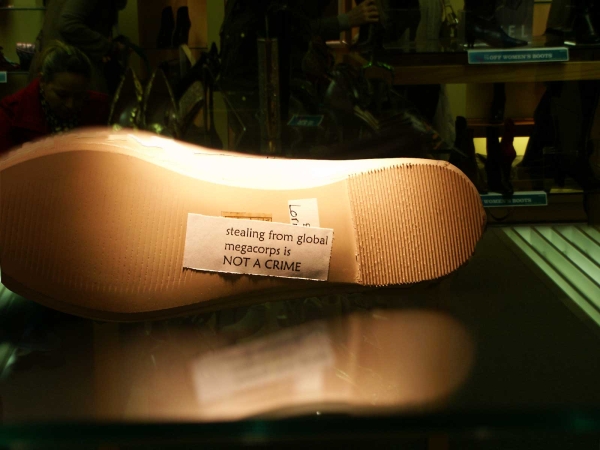 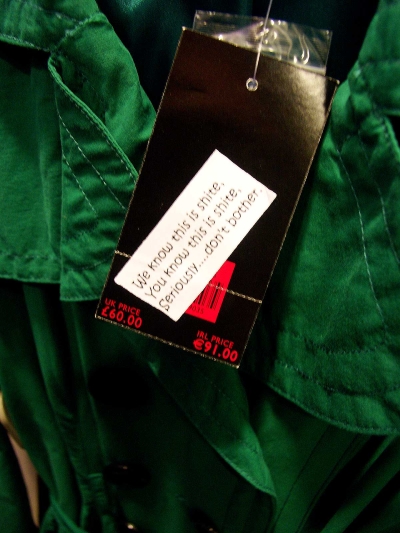 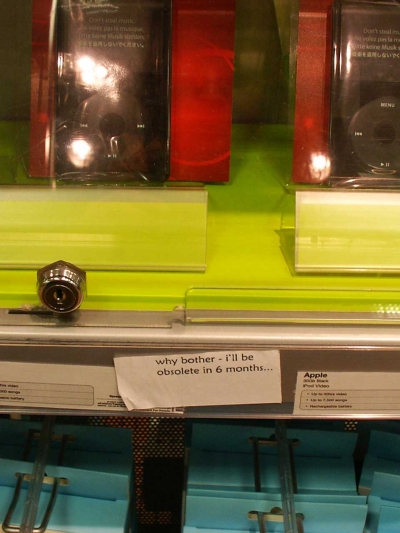 Why did these pesky pixies make life difficult for the staff who then had to peel the labels off? Well, read on and discover why some the aforementioned places were targeted.

Arcadia Group is owned by billionaire Philip Green. In 2005, Arcadia's profits "rose to £326 million in the 52 weeks to 27th August 2005...As a reward, Arcadia shelled out a £1.3bn dividend to its shareholders, £1.2bn of which went to Green, already the UK’s fifth richest person."[1] However whilst this was already well and good for Green and Arcadia shareholders it was a different story for the workers who produced the tacky t-shirts for Topshop and their ilk. In a factory in Cambodia in 2004, after over 1000 workers went on strike to protest against poor pay, "19 union leaders and 120 union workers were fired"[2].
In conclusion: not Green by nature at all.

In 2003, Dixons, who mainly stock electrical equipment (hi-fis, vacuum cleaners, iPods etc) announced a partnership with 'support services firm' Capita to manage one of Dixons' call centres. Uh oh - bad move - as Capita is probably best know for its mismanagement of the Criminal Records Bureau: after failing to check teachers' records on time the company was eventually fined £2 million; small change really from the £400 million budget it received from the government for the contract[3].
After the partnership deal was clinched, Capita went on to sack staff at the Sheffield based call centre[4].

Dixons dealing with the Conservatives, environmental reporting and tax avoidance has also been criticised by many in the past. In a report in 2001, Friends of the Earth found that Dixons was a business backer of the Conservative Party; it also short-listed the store as "as [a] possible targets for a major consumer campaign over 'dodgy' chemicals."[5] FOE also found that the company had no formal policies on conduct on overseas labour standards. Dixons has also been accused of using their subsidiary, Dixons Insrance Services ltd registered in the Isle of Man as a tax haven[6].

Finally, at the beginning of this year, Which? magazine had found Dixons to be one of the worst retailers in Britain.[7]

All this is before we even go into the environmental devastation involved in producing some of the merchandise that Dixons sells!

****
Most of the above information was from Labour Behind the Label, the campaign that supports garment workers' efforts worldwide to improve their working conditions.


Be warned. The Pixies may strike again...

[5] 'UK Democracy Plc How the corporate juggernaut is crushing our democracy', Friends of the Earth briefing, December 2001,

[6] From 'UK Democracy Plc How the corporate juggernaut is crushing our democracy'
and 'Company information: Dixons', Ethiscore,