Supporters harassed by odd copper, as detainees starve at Campsfield. 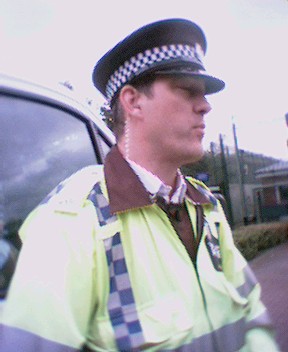 Yesterday's demonstration at Campsfield in support of Zimbabwean hunger strikers was marred by some of the most abusive policing yet. It's not clear whether the abuse is part of an official policy to discourage protest, or an ad-hoc strategy of the officer in charge - the clownish and erratic R. Braithwaite (pictured).

Unmoved by the suicide of a Kurdish boy at the centre on Monday, Tuesday's attempted suicide, or by the continuing fast-to-the-death against deportation going on inside, Braithwaite's concern was for the the paintwork on the new "baby fence" at the back of the centre. This new fence has been put there, apparently, to stop us peeping through the small holes in the main 20-foot fence to see the detainees inside. Braithwaite guards this fence as if his career depends on it. Which perhaps it does. Sometimes we wonder whether the Campsfield posting isn't a sort of last-chance test for marginal promotion candidates.

But serious stuff first: as I write this there are 4 men still on hunger strike in Campsfield. There were 7 earlier in the week but 2 were released and 1 transferred elsewhere. Concerted action by detainees at Yarl's Wood yesterday successfully impeded Patricia Mukandara's deportation until it could be halted by a last-minute high-court injunction.

The Home Office immediately took its revenge by moving all the women out of Yarl's Wood to separate locations. Two of the men on hunger strike in Harmondsworth are entering coma. It is feared that once they enter coma they will be force-fed: no escape for anyone without permission, not even from life.

Tomorrow, Monday, you can join pickets against deportations at British Airways shops in London (213 Piccadilly), and in Manchester (Deansgate), both from 12:30 till 2:00pm.


Braithwaite tries to take the piss, and fails.


Yesterday's demo was our worst-policed one since the amazing police-party at the 10th anniversary demo in November 2003. The money Thames Valley Police are prepared to spend harassing us is nobody's business apparently. Continuous, in-your-face photography and video. Continual, dire warnings from Braithwaite about not damaging the wheat in the adjoining field — which his camera-cops then walked through and trampled in leisurely manner, without admonition. Earlier in the week Braithwaite threatened to detain everyone, indefinitely, until the "culprit who banged the fence" confessed. Nobody confessed, so he threatened to examine the footage in the (old, rusted-up) CCTV cameras.

His showstopping final act yesterday was the attempted arrest of a demonstrator for pissing behind a hedge. So amazed was the demonstrator that he burst out laughing. If Campsfield is indeed a last-chance posting, Braithwaite could be back on the door at Mothercare again very soon.