The rights and wrongs of torching cars 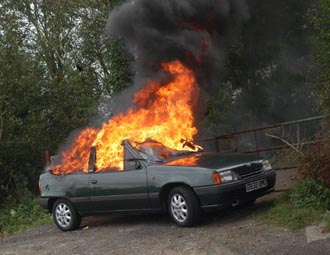 According to the local corporate rag, "firefighters dealt with about 300 vehicle fires last year in Oxford, compared to 241 in 2003. The increase is despite fewer reports received by Oxford City Council of abandoned vehicles. There were 2,199 in 2004, a drop of 492 on the previous year."

Why are people more willing to burn cars now?

I think there's more to it than that. The traffic in Oxford and London is getting unbearable, and according to a recent study the pollution in Oxford is so bad that standing on a street corner in the city centre is the equivalent of smoking three packets of fags:

I say good on them. The damage done to the atmosphere by a few burning cars can be offset long-term by fewer cars being bought, and public transport use going up.

I got rid of my car, and life's more difficult for me now in some ways: it meant changing jobs, and changing a lot of how I live my life. But at least I'm not attacking anyone now with toxic gas.

If someone drives a car and doesn't really need to, they're assaulting you and the people you love, and both have a right to self-defense.