Oxford ‘Naming of the Dead’ in the Iraq war 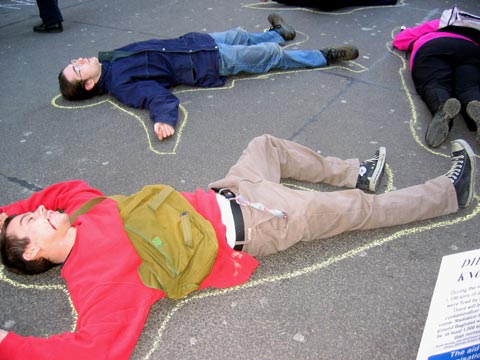 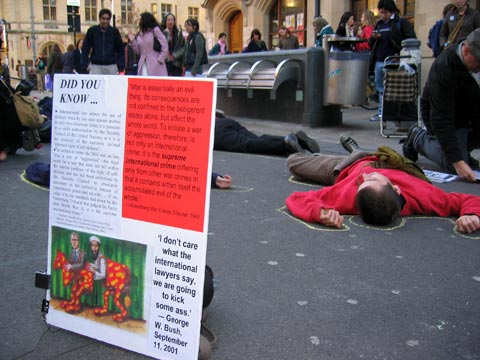 Oxford ‘Naming of the Dead’ in the Iraq war

Yesterday in Cornmarket Street, Oxford, a group of people including both students and Oxford residents, gathered to commemorate the lost lives of Iraqis, coalition troops and hostages. The timing of the event, two days after the re-election of George Bush, reflected our fears about the imminent new US campaign of bombardment of Iraqi cities, already promised by the Bush administration. As the afternoon crowds streamed by in the busy shopping street, what impressed those of us who were handing out leaflets was the high level of sympathy and interest and, in many cases, the willingness to stop and discuss the issues. A large group of smartly-suited Chinese, possibly businessmen, stared in amazement at the goings-on, listened to my hasty explanation and eagerly accepted leaflets. Quite a few visitors from the Middle East, including several from Iraq, were heartened to know that some people in Britain care about what is happening in their region. Local people, young and old alike, were equally concerned and anxious to learn more.
Below is a report from Zahra Al-Rikabi, an Oxford student who took part in the action.

These were the words stretching across a banner held up in the middle of Cornmarket street, nearby a group of students lying on the floor, with fake blood smeared on their faces and a chalk outline drawn around them. This phrase itself was touching, but more so, the uninterrupted list of names that went on for nearly two hours.

The event, organised by Oxford Student Activist Network, was to mark the death of over 100,000 Iraqis since the beginning of the war, according to the recent report by the Lancet Medical Journal. The names of the dead were read out, with their ages and cause of death. This created a vivid and powerful atmosphere, reminding people that the war is still going on in Iraq and that innocent people are losing their lives as the price for the wrong decisions made by a few men on the other side of the world.

As the saying goes, one death is a tragedy, but a million deaths are a statistic. I think the event today was a humble attempt at changing that. Somehow, just hearing the names of the dead made them real, made them count. It asserted that they once lived as we do, and were loved and now leave a gap in someone’s heart. And maybe, just maybe, it may have moved someone to do their part to end this tragedy.

Many other groups across the world have carried this simple yet powerful message over the last few days. Two days ago, Stephen Hawking joined writers, politicians, actors, sports stars, students and peace campaigners in a reading of the names of those who have lost their lives In Iraq since the conflict began. The reading, organised by the Stop the War Coalition, was one of hundreds taking place all over Britain and in other countries, including Italy, Spain, Switzerland, Australia and Iraq.